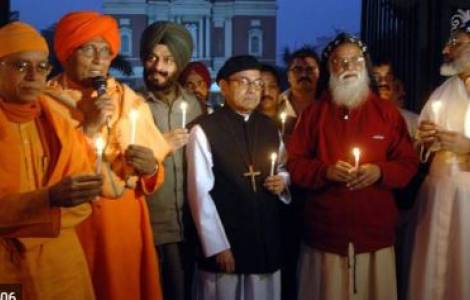 Hyderabad (Agenzia Fides) - Indian religious leaders unite to fight Covid-19 in India: as Agenzia Fides learns, religious leaders of different faiths (Hindus, Christians, Muslims, Sikhs) and various interreligious organizations have tightened a collaboration agreement to help contain the spread of Covid-19 in India. In a joint declaration, sent to Agenzia Fides, the organizations say they "want to play a constructive role for the common good by uniting people of all faiths". The leaders intend to "speak with one voice", concentrating efforts on service and unity as the country faces the pandemic. Religions aim to "avoid prejudice, a sense of exclusion, superstition and fanaticism spread in the name of religion", allowing "the scientific approach to combat the virus" to prevail, continuing in one's spiritual and material commitment. "Religion is probably the most powerful means of mobilizing human conscience to serve the common good: we unite as a single force to give impetus to action to overcome the pandemic", says the text.
While the world is going through a pandemic "religion has often been cited in both positive and negative contexts", notes the statement. "On the one hand, in this moment of uncertainty, people have turned to religion out of hope, strength and spiritual resilience. Faith has inspired people with a sense of solidarity and a desire to serve others, especially the most vulnerable. At the same time, the name of religion has also been used to emphasize a sense of separation and exclusivity, to cultivate prejudice, to reject science and marry superstition".
"It is an urgent imperative that we, representatives of various faiths and interreligious groups, reaffirm those principles common to all religions that have the greatest impact on our response to the current crisis", says the statement, noting that "the essential spiritual and moral teachings of all religions are identical. During this crisis "all religions must seek ways to promote unity and solidarity so that humanity fights this collective challenge. At the heart of all religions is a spiritual conception of the human being that transcends the material body. This spiritual reality, which is called soul, is the source of divine attributes and virtues that allow human beings to demonstrate altruistic behavior. Religion teaches that all humanity is interconnected and interdependent: it is a family and cells of a single body", concludes the statement, reiterating the invitation to unity and the common good.
The collaboration between civil institutions and religious communities has become evident in the state of Andhra Pradesh, where Prime Minister Y.S. Jagan Mohan Reddy, has announced a special subsidy for all temples, mosques and churches. The economic contribution, which amounts to 5,000 Indian rupees (over 62 euros) is a recognition for the material and spiritual work that all religious communities are carrying out to contain the emergency of Covid-19, while the Indian government has just announced a 14-day lockdown extension until mid-May.
The Prime Minister of Andra Pradesh has stated that his government intends to be present with all the people and organizations who are carrying out programs for the well-being of people, regardless of religion, caste and region, in the time of Covid-19. The state, in fact, has already made a contribution of 1,000 rupees (12 euros) to each family, and also supplies food rations three times a month to the most needy families.
According to the 2011 India census, Hindus make up 80% of the Indian population of 1.3 billion and are over 966 million. Muslims represent 14% (172 million), while Christians are 2.3% (around 29 million). (SD-PA) (Agenzia Fides, 4/5/2020)