AMERICA/MEXICO - In the face of the pandemic, migrants "continue to be invisible in social and humanitarian policies" 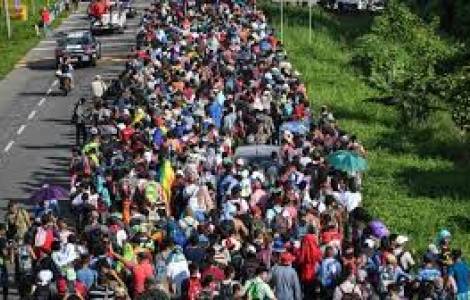 2021-07-14
Violence in Chiapas has become "a public health problem"; an Italian volunteer killed

2021-07-14
"Those who demonstrate are not criminals, but ordinary people who express their discontent": the Church's appeals to dialogue

2021-07-07
An indigenous catechist, defender of rights, assassinated, the diocese's complaints on the increasing violence in Chiapas are not heard

2021-07-02
Legalization of abortions in Hidalgo: "This decision is not shared by the majority of citizens"

Mexico City (Agenzia Fides) - The Pastoral Care of Human Mobility of the Episcopal Conferences of Mexico, Guatemala and Honduras, published a document on the migration situation in these times of coronavirus, sent to Fides.
First of all, the representatives note that the high risk of coronavirus infection is constant in their three countries and "although each nation has taken measures to prevent and contain the pandemic, not all governments have put in place sufficient measures to protect their citizens and neighbors" .
They note "with concern that Mexico is not treating the issue of migration as a vital phenomenon in these days of Covid-19, allowing its northern neighbor to expel citizens of any country in its territory, including many without due process and without the necessary protection provided to asylum seekers". They then go on to denounce that "the expulsion of entire families with children, late at night, makes them easy prey to organized crime".
Similarly, Mexico "continues to expel Central American citizens, in particular Honduran migrants, to Guatemala, violating international law and leaving these Honduran citizens in a situation of total lack of protection, thus increasing their degree of vulnerability. Guatemala is allowing migrants to pass through its territory, even with closed borders and with the complicit silence of the Honduran government, which is not doing enough to meet the needs of its population and maintain border control which they say they have closed".
The representatives of the three Episcopal Conferences note "with concern, that migrants, among the many vulnerable people facing this pandemic, continue to be invisible in social and humanitarian policies".
Faced with this situation, in the second part of the document, the Pastoral Care of Human Mobility "jointly as Church, urges the governments of Mexico, Guatemala and Honduras" with a series of requests. First of all "we consider the issue of migration as a vital phenomenon in this period of the spread of coronavirus" in order not to expose migrants to greater risks as well as the population, and "to reduce the high degree of discrimination and stigmatization of migrants as carriers of the virus". They then ask to "stop expulsions, apply international law which prohibits a country from expelling a foreigner to another country other than its country of origin or where its legal residence is established". For humanitarian reasons and to avoid overcrowding, people who are in a process of regularization of their situation should be allowed "to leave the migratory stations and detention centers for migrants". Adequate medical care is also guaranteed to migrants, regardless of their immigration status.
They therefore call on those responsible for the protection of human rights in their respective countries to raise their voices and to promote concrete initiatives in defense of the rights of the most vulnerable.
"Finally - they conclude - we join our voice to that of those who have already done so, to ask our rulers not to politicize the coronavirus crisis and to take concrete measures to stop the spread of the virus. Among these actions, it is essential to consider migrants as a highly vulnerable population". The document is signed by the Presidents and Executive Secretaries of the Episcopal Commissions for Human Mobility of the three countries. (SL) (Agenzia Fides, 13/4/2020)

AMERICA/HONDURAS - Haitian immigrants forbidden to take the bus or ask for rides, the Church welcomes them into the communities

AMERICA/ARGENTINA - July 23: National Day of Prayer for the victims of Covid