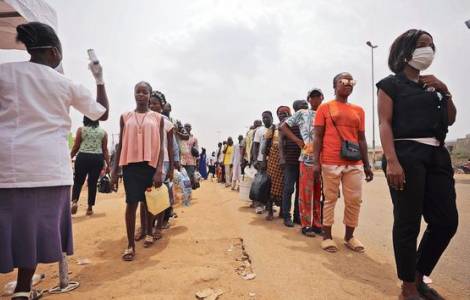 Rome (Agenzia Fides) - Africa has shown greater reactivity to the Covid-19 emergency compared to Europe and America. Local governments quickly took steps to contain the epidemic (from closing borders to lockdown) without waiting for the numbers of infections to increase to hundreds of cases. This is what emerged from the web-meeting held on April 4, organized by the bimonthly magazine "Africa" and by the monthly magazine "Africa e Affari", in which Agenzia Fides took part.
However, coronavirus is a serious health and economic emergency for African Countries. The fragile local health systems which already in several cases face other epidemics (AIDS, malaria even measles as recently happened in the Democratic Republic of Congo), risk being overwhelmed by the spread of the pandemic. As Enrico Casale of Africa magazine recalls, citing the Montfortan missionary Piergiorgio Gamba, who works in Malawi, African Countries have to cope with the emergency with few structures, poorly distributed throughout the territory, with few doctors and nurses. For example, in Malawi there are only 10 beds for quarantine, 17 for intensive care and only 2 laboratories for swabs.
Covid-19 containment measures also have a very serious impact on the lives of millions of Africans who live thanks to informal economy. In general, if the upper middle classes can stay at home because they still have economic guarantees, the same does not happen for the poorer classes who are forced to leave the house every day to get what little they can for themselves and their families. A complete lockdown like that adopted by European Countries is therefore difficult to apply in the African context.
In South Africa for example, as reported by Scalabrinian missionary Fr. Filippo Ferrara, the townships where most of the black population lives are "like boilers with boiling water; if there is no relief valve they will explode". It is no coincidence that the townships are surrounded not by the police but by the army in combat gear.
In Nairobi alone, the capital of Kenya, "at least 2 million people have to leave the house every day to put something on the table in the evening", says Comboni missionary Fr. Renato Kizito Sesana.
"In Kenya, most people do not yet have an awareness of the seriousness of the phenomenon", says Fr. Kizito. "There have been few deaths but there is a continuous growth in the number of sick people. Covid-19 highlighted the fact that there are two economies in Kenya: one of 30% of the population who can stay at home because they have something to live on; and that of the rest of the population who cannot stay at home otherwise they starve to death", underlines the missionary. Indeed, the Kenyan government has not imposed a total lockdown for fear of serious accidents.
"Covid-19 was initially seen as a disease of the "rich", of those who travel and have contacts with foreign Countries for work reasons", reports Cleophas Adrien Dioma, who describes the situation in his Country, Burkina Faso, where the first Covid-19 patient died in sub-Saharan Africa: former Vice President of Parliament, Rose Marie Compaoré. However, the virus has now also infected people from the most humble classes, forcing the government to take measures to contain and reassure the population, such as blocking rents and other expenses for shopkeepers for three months. (L.M.) (Agenzia Fides, 6/4/2020)

ASIA/SINGAPORE - The contribution of Catholic nurses to health assistance during the pandemic, a channel of God's love