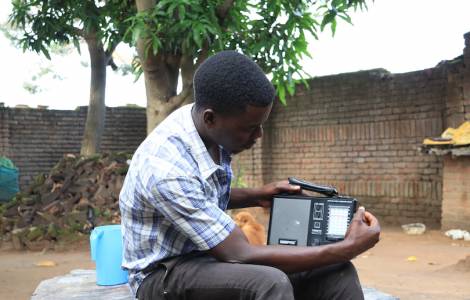 2019-11-28
Passion and zeal at the service of patients: the commitment of the Catholic community of Chipata

2019-07-18
President of the Bishops' Conference: "It is time Zambia became a fully-fledged missionary Church"

2019-07-01
Appeal by Caritas for areas hit by famine: "It is necessary to act immediately to prevent people from dying of hunger"

Lusaka (Agenzia Fides) - Radio continues to be a fundamental source of information for African societies in many nations of the continent. "Thanks to its usability, it is a means that has the ability to reach a wider audience and can share the diversity of society", notes Fr. Winfield Kunda, Communications Director of the Zambian Bishops' Conference (ZCCB).
In the note sent to Agenzia Fides, the Director highlights the need to deal with topics such as the environment, health, education and the economy, and not only focus on politics. The aim is to raise awareness among listeners and create the conditions for common actions, to raise awareness of issues that touch the sphere of personal and community ethics. In particular, this role is played by the so-called "community radio", very widespread and very important in Africa, often animated and supported by the local Churches. "Radio can represent an arena in which all voices can speak, be represented and listened to. If used well, radio stations should serve communities, offering a wide variety of programs, viewpoints and content and reflect the diversity of the audience", says Fr. Kunda, noting that radio is also a "meeting point" where one can share the Gospel values with a wider audience and find ways of collaboration for the common good.
In a statement sent to Fides, the Communications Director praised men and women who dedicate time to education, entertainment and information via radio. "These people are commendable, especially because the services offered go beyond their remuneration in economic terms", he explained.
Fr. Kunda also suggested that a policy is to be implemented that would oblige government departments to sponsor programs and advertise on community radio stations".
In Africa, radio has an enormous weight in the spread of information compared to other media, given the very high rate of illiteracy and the poor coverage of the electricity network which exclude a large part of the population from the use of the press, television and the Internet. The radio landscape is generally made up of state broadcasters, who often simply broadcast the news from the former colonizing powers in English or French. Alongside these, from the 1960s to the present day, a dense network of small radio stations has developed throughout Africa that have taken on different names: educational radio, agricultural radio, rural radio, community radio, free radio. These are stations with a catchment area limited to a territory or a region which is not too large, and which have often been supported by projects of international organizations, foundations, NGOs, and also of religious communities such as the Catholic Church. (AP) (Agenzia Fides, 27/2/2020)

OCEANIA/PAPUA NEW GUINEA - Extraordinary missionary Month: new technologies as a tool to "preach from the roofs"