ASIA/PAKISTAN - Dialogue and fraternity: the legacy of the Abu Dhabi Declaration in Pakistan 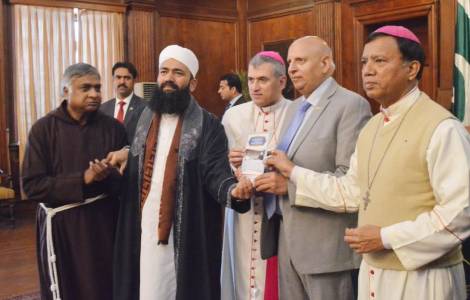 Lahore (Agenzia Fides) - Dialogue without prejudice, the culture of encounter, the fraternal relationship with others, beyond the differences of culture, religion or ethnicity, language or social class, material and spiritual collaboration between Christian faithful and Muslims: this is the precious patrimony that the historic document gives on "Human fraternity for peace and life in the world" signed by Pope Francis and Ahmad Al -Tayyeb, Grand Imam of Al-Ahzar, on February 4, 2019. This is what emerged from a recent meeting, held in Lahore, which wanted to celebrate the first anniversary of that historic signature, which in Pakistan generated initiatives for exchange, dialogue, interreligious prayer.
The commemoration, organized by the National Commission for Interreligious Dialogue and Ecumenism, within the Catholic Bishops' Conference of Pakistan, was attended, among other Christian leaders, by Archbishop Sebastian Francis Shaw, President of the Commission, and Archbishop Christophe Zakhia El-Kassis, Apostolic Nuncio to Pakistan. Next to them, Chaudhry Mohammad Sarwar, Governor of the Punjab province, Muhammad Abdul Khabir Azad, Imam of the great "Royal Mosque" of Lahore and numerous other prominent Muslim leaders. Participants included members of civil society, school representatives, students of college and university faculties and a good number of faithful from different religions.
The purpose of the event was to renew the common commitment for dialogue and fraternity in Pakistan and express solidarity with Pope Francis and Ahmad Al-Tayyeb for their efforts in promoting reconciliation, the culture of dialogue, peace, freedom and justice in the world.
Archbishop Shaw said that "accepting and welcoming one another is essential for living together in peace and harmony", welcoming the fact that "many people of different religions" were brought together "to commemorate the first anniversary of that historic document". The Apostolic Nuncio Zakhia El-Kassis reaffirmed Pope Francis' vision for peace, harmony and coexistence in the world, recalling that "it is necessary to promote the culture of dialogue as a path for mutual respect, acceptance, harmony, justice, freedom and equality".
The commitment of Christians and Muslims in Pakistan for dialogue and coexistence, with a view to the common good of the country, was appreciated by Chaudhry Mohammad Sarwar, Governor of the Punjab province, who said: "We are all called to give our contribution to making Pakistan a better country". Peace, he recalled, "cannot be promoted in a society without justice", promising that "the government will do its best to promote religious harmony".
Muhammad Abdul Khabir Azad and the other Muslim leaders also expressed their favorable view regarding the Abu Dhabi document, confirming their commitment to "mutual respect, dialogue, human rights and justice, based on mercy, in order to build a prosperous and peaceful society in Pakistan".
At the end of the commemoration, an olive tree was planted in the garden of the Governor's Palace of Punjab in Lahore, a symbol of peace and prosperity in the Holy Bible and the Koran. (PA) (Agenzia Fides, 25/2/2020)