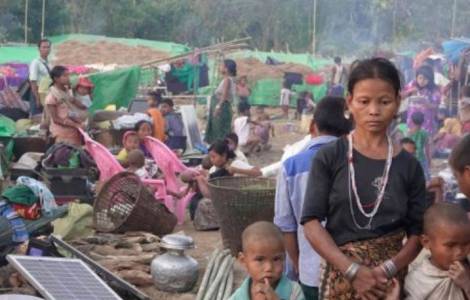 2020-01-17
The Bishop of Myitkyina: "Stop violence, which slows down development"

Naypyidaw (Agenzia Fides) - Over 100 civil society organizations in Myanmar urge the federal government to restore services in Rakhine and Chin states. On February 3, the government shut down Internet access in Buthidaung, Maungdaw, Rathedaung and Myebon townships in Rakhine and Paletwa in Chin, for fear of the escalation of violence after Intense fighting was reported in the area between the Burmese army and the Arakan Army (AA) rebels.
Civil society organizations say denying people Internet access violates their human rights. "Cutting off Internet access, especially in conflict-torn areas, might encourage human rights violation, and civilian organisations are worried that the situation could worsen", says a note of the Forum of associations, which vowed to protect and care for children, women and civilians in accordance with local and international laws.
Among the 105 organisations seeking the restoration of Internet access in Rakhine and Chin are the Shan State Peace Organisation, Peace Committee of Rakhine State Civilian Organisation, Rakhine Women’s Network, Rakhine Women’s Union and the Rakhine State Peace and Stability Support Team. "In the Universal Declaration of Human Rights, prohibiting people from access to information is a human rights violation. This is supposed to be a democratic government, so we need to put a spotlight on this issue", said U Khaing Kaung San, a spokesman of the Forum.
According to U Zaw Htay, a spokesman for the Presidential Bureau of Myanmar, the government understands the concerns of human rights activists but "security is a top priority in this area". "Other countries around the world have introduced similar measures for security concerns", he said on February 21. "The Tatmadaw (the Burmese army, ed.) has ordered the shut down of the Internet in nine districts", he confirmed. "The government is taking the necessary measures to prevent the situation in Rakhine from worsening further and the ban will be withdrawn as soon as the security situation improves", he added.
UN human rights experts said last week that shutting down the Internet seriously harms the lives of over a million people in Rakhine state, endangering security, protection, health, education, food, housing, livelihoods, freedom of expression and right to information, participation, association and assembly. "The general shut down of the Internet cannot be justified and must end immediately", they said.
The river that touches the city of Paletwa, in the state of Chin, the main means of transport, has also been interrupted for over a week due to the fighting. Food is running out and ferry services have stopped.
Although the Arakan army is belligerent, the Burmese government has made it known that it is still willing to negotiate with the organization. The AA and the Kachin Independence Army (KIA) are members of the Northern Alliance, which has informal talks with the government, and is currently carrying out formal peace negotiations with ten armed groups, an expression of ethnic groups that have signed the national ceasefire agreement. (SD-PA) (Agenzia Fides, 24/2/2020)

EUROPE/ITALY - Covid-19: even more dramatic situation for those living in war zones

AFRICA/EGYPT - Coptic Bishop Pachomios: the internet and the network contribute to breaking up families