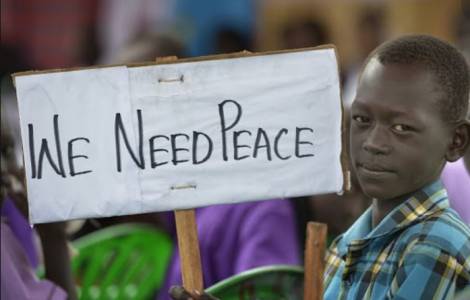 2020-01-17
The Bishop of Tombura-Yambio to politicians: "True leadership is in favor of young people"

Peace is at hand. South Sudan is experiencing a crucial phase in its history: the path to end the civil conflict that has been going on for six years is open. The president, Salva Kiir, has announced an agreement with rebel leader, Riek Machar, for the formation of a government of national unity. The South Sudanese population looks to the pact with trepidation and hope, after years of suffering.
The peace agreement that lasted since September 2018, the longest in the very short history of South Sudan, was about to end like so many other initiatives. The nightmare of the civil war that seemed to have killed nearly 350,000 in less than seven years, caused the internal and external displacement of almost 4 million people and reduced 7 million citizens at the end of their rope with regards to food emergency, seemed to be near again. The youngest nation in the world, which separated from Sudan only in 2011, is among those that most frequently resort to the use of child soldiers, around 20 thousand, and is unable to exploit the enormous potential of an area rich in resources.
Even the sensational gesture of Pope Francis, who in April 2019 had invited political and religious leaders to the Vatican, kissing their feet and begging them to make a solemn commitment to peace, seemed a distant memory. Then the biggest surprise came unexpectedly. "The compromise we have reached today - said President Salva Kiir on February 15, when it was now impossible to reach an agreement on the new composition of the state that would satisfy government and opposition - is a painful decision, perhaps the most difficult of my life, but at the same time it represents a necessary step if we want to achieve peace". With these words, Kiir announced that he had accepted the requests to reduce the States of South Sudan to 10 (from 32) and put an end to speculations about the imminent breakdown of the negotiations for the formation of the government of national unity (as required by the Revitalized Agreement on the Resolution of the Conflict signed in September) and the immediate return to war. "Last April - he added - we were in the Vatican in the presence of the 3 world religious leaders (the Pope, the Archbishop of Canterbury and primate of the Anglican Church and the Moderator of the Presbyterian Church of Scotland, ed.). We prayed and the Pope kissed our feet. We cannot forget this. It was a blessing for our Country, we cannot ignore it by going back to war".
The challenge of the formation of the government of national unity now presents itself, while the leader of the armed opposition Riek Machar has leaked his opposition to the creation of three new administrative areas (the new agreement provides in addition to the reduction of States, the establishment of the three administrations of Ruweng, Pibor and Abye, ed.) But elements that bode well for peace are clear: the explicit declaration of the President; the return to Juba, on February 16, of Machar himself, from the exile of Khartoum; the unity shown by all the international actors involved (African Union, European Union, Intergovernmental Development Authority, United States) in binding aid for peacekeeping.
The Country, therefore, breathes a huge sigh of relief but awaits news on the formation of the government and therefore on the future of the country. Sister Elena Balatti, a 20-year Comboni resident in South Sudan, a journalist and a careful observer of the situation, speaks to Fides. (...)

AFRICA/BURUNDI - The Xaverians: "The Church is close to her children in the work of reconciliation in the Country"