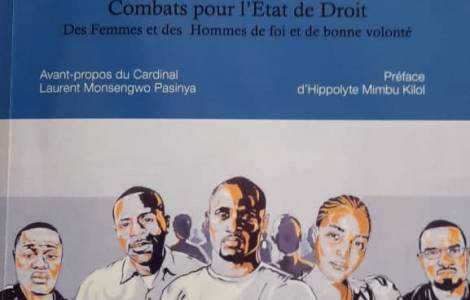 2020-03-31
Cardinal Ambongo criticizes the postponement of the blockade in Kinshasa: "One must not play with people's lives"

2020-03-03
"What is the aim of the ruling coalition?" ask the Bishops a year after the presidential election

Kinshasa (Agenzia Fides) - Among the results produced by the three peaceful marches organized by the Lay Coordination Committee (CLC), from December 2017 to February 2018, "it seems to me that the most lasting and useful result has been achieved, thanks to civic education given in various parishes in the country, when thousands of young Congolese were able to make the supreme sacrifice to defend their human dignity and the common good of their Country". This is what Cardinal Laurent Monsengwo Pasinya, Archbishop Emeritus of Kinshasa, says in the preface of the book "Congo in the hurricane of History. The struggle for the rule of law for women and men of faith and goodwill", by Professor Isidore Ndaywel The volume, published by L'Harmattan in 2019, was presented in Kinshasa on February 15.
In his book, historian Ndaywel, coordinator of the CLC, praises the "going beyond oneself" demonstrated by the many people looking for peaceful solutions to the turbulences that have marked the political scene of the DRC in past years. The author also notes the role played by religious denominations in the struggle for the rule of law in the DRC; role they have played for centuries and will continue to play for the fate of the Congolese people.
The choice of the release date of this work is as significant as its content. The book was launched on the market on the eve of the 38th anniversary of the Christian march against the then-dictator, Mobutu Sese Seko. "The CLC began with the 16, 1992 march. It was its first major mobilization, in which clerics and prominent civil society figures were actively involved", said one of the speakers, reviewing the book.
"Like the CLC, I dream of a life worthy of Congo, worthy of all Congolese, worthy of all Africa. Since Congo cannot afford to remain the Country of missed opportunities, it is therefore up to all its people to continue courageously their long march towards the rule of law for the development of social well-being", underlined Isidore Ndaywel.
The presentation of the book was attended by members of the movements of citizens, academic personalities, some political-administrative authorities and priests, as well as His Exc. Mgr. Ettore Balestrero, Apostolic Nuncio in the DRC. We also noticed the presence of the widow Rossy Mukendi, one of the best known martyrs of the peaceful marches organized by the CLC, from December 2017 to February 2018.(M.B.P) (Agenzia Fides, 18/2/2020)