ASIA/PAKISTAN - A kidnapped Christian girl reunites with her family 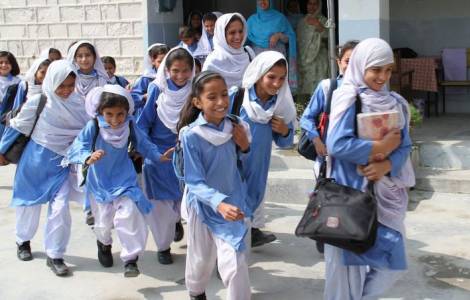 Lahore (Agenzia Fides) – At present we can consider it a story with a happy ending, but it remains a rare case. Sneha, 14, a Christian girl from a family who lives in the "colony" of Bahar, Lahore, who had been kidnapped by a Muslim man, was rescued and is now with her family. As Fides learns, Sneha is Sabir Masih's youngest daughter and has two sisters and an older brother. She was a student at the "Franciscan Girls High School" and in the evening she also attended special courses to prepare for her final exams.
Sneha claimed that Zeeshan, a Muslim man, had insistently asked her to make friends with him on her way home, and she continuously rejected his invitation. On the evening of January 14, 2020, while Sneha was returning home, Zeeshan forced her to follow him with violence and pushed her into a vehicle where six men started hitting her. She was seized and led to an unknown place, where she was beaten and repeatedly raped. They then asked her to sign some blank sheets and, when the girl refused, they began to torture her. Those documents included a marriage certificate and a certificate of conversion to Islam. The kidnappers also threatened her: if she told her family what had happened, she would have had to face serious consequences and her sisters would have suffered the same violence.
Sneha's father, Sabir Masih, reported her disappearance to the police. After the complaint, a court of first instance gave the police the order to start investigations. After a few days of investigation, the police rescued Sneha on January 19, 2020 and returned her to her parents. But the kidnappers, who kept her segregated for five days, are on the loose and unpunished.
Some organizations that defend Christian rights in Pakistan, such as the "Center for Legal Aid, Assistance and Settlement" (CLAAS) and other NGOs, are supporting Sneha's family by providing free legal assistance. Sabir Masih and his family, meanwhile, have received threats from the kidnappers who are pressuring the family to withdraw the complaint against them. Sabir Masih's family has been transferred to an unknown place.
As Nasir Saeed, director of the NGO "CLAAS" tells Fides, "cases of kidnapping of Christian and Hindu girls, forced conversion and forced marriage continue to occur with impunity. It is a social alarm. These are widespread episodes in Pakistan and have also been reported in national and international media, but the Pakistani government has failed to act to stop the kidnapping of Christian and Hindu minors".
Recently the Council of Islamic ideology (CII) has stigmatized and defined forced conversion as "non-Islamic". Last July, Prime Minister Imran Khan, condemning that practice, said that "there is no precedent in Islamic history to justify the forced conversion of other people". Christian and Hindu parliamentarians, such as Ramesh Kumar Vankwani and Naveed Amir Jeeva, have raised the issue several times in Parliament, calling for greater commitment from the police force and firm political action.
The Child Marriage Restraint Act, the law that prohibits marriages with minors, was passed only in Sindh province in 2014. In 2019, Senator Sherry Rehman presented a bill to the Senate to raise the minimum age for girls to marry to 18. Despite opposition from some Islamic parties (such as Jamiat Ulema-e-Islam and and Jamaat-e-Islami), the measure was approved by a large majority. It was sent to the Lower House where it is still to be discussed.
In British India, before the "partition" between India and Pakistan, a law was passed in 1929 to ban marriages with girls: according to some lawyers, that "Child Marriage Restraint Act" is still apparently valid and applicable even in today's Pakistan. (PA) (Agenzia Fides, 13/2/2020)