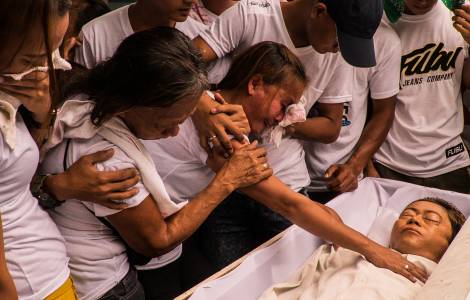 Manila (Agenzia Fides) - "I am both happy and sad", said Bishop Pablo Virgilio David, at the head of the diocese of Caloocan, north of Manila, to Agenzia Fides, who welcomed the prosecutors decision to drop "sedition" charges against four Catholic Bishops. The Department of Justice (DOJ) have exonerated four Filipino bishops charged with plotting to overthrow President Rodrigo Duterte and his administration, included in a group of 36 activists, lawyers, religious. By many observers, the move had been described as intimidation to silence critics towards the government.
"I am happy that the criminal charges of sedition, incitement to sedition, obstruction of justice and cyber slander brought against me and my brother bishops have been rejected by the college of prosecutors, who carried out the preliminary investigations", said Mgr. David.
"On the other hand, I am sad that prosecutors found probable cause to indict the two priests, Fr. Albert Alejo SJ and Fr. Flavie Villanueva SVD, and other church leaders. I still hope and pray that the charges against them will also be dismissed soon by the courts", he said.
The Department determined that the bishops showed no intention of committing "sedition" and that the complaints filed by the Criminal Investigation and Detection Group lack evidence. The accused Bishops were Archbishop Socrates Villegas, Bishop Pablo Virgilio David, Bishop Honesto Ongtioco and Bishop Teodoro Bacani, retired prelate of Novaliches. Charges against Father Robert Reyes and La Salle Brother Armin Luistro were also dismissed.
Charges were, however, filed against Jesuit priest Albert Alejo and Divine Word priest Flaviano Villanueva and nine others for their involvement in the alleged plot to oust the president Duterte. All the activists, religious and lawyers involved have repeatedly said that they will not participate in any action with violent or illegal means. Even the Catholic Bishops' Conference of the Philippines had been working in defense of the accused, stating that the accusations were "beyond belief", noting that those accusations were intended to scare and silence the Bishops.
President Duterte in recent years has come into conflict with the Catholic Church above all for the issue of the "war on drugs" and for the violations of human rights, repeatedly denounced by NGOs and also present in a recent report by the NGO "Amnesty International", released on January 30th. "The families of the victims - Amnesty notes - have not obtained justice for their loved ones, due to the enormous obstacles existing in filing complaints against the perpetrators, including the fear of retaliation. Nor was any significant responsibility for the killings identified at a national level".
According to official data, in Duterte's "war on drugs", over 6,000 people have been killed in police operations, while human rights groups estimate the existence of another 25,000 victims of murders carried out by "vigilante squads", all unpunished.
A recent investigation by the Philippine online news site "Rappler" found that the government has so far followed a compliant attitude, leaving the cases of such killings unresolved, due to systematic shortcomings of the judicial system and the lack of commitment or complicity of the forces. police. (SD-PA) (Agenzia Fides, 12/2/2020)