ASIA/BANGLADESH - A missionary: "To bring the Gospel of Christ into society" 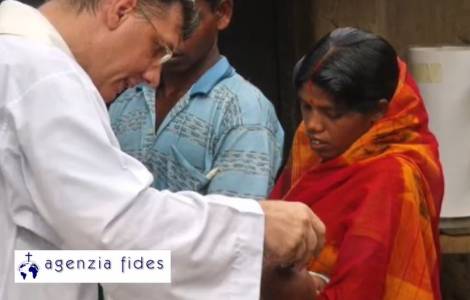 2020-01-16
Formation and interreligious dialogue: the priorities of the diocese of Khulna

2019-11-19
Humanitarian aid after the cyclone: appeal of "Catholic Relief Services"

Dhaka (Agenzia Fides) - "The Church in Bangladesh is called to give greater emphasis and responsibility to lay Catholics, trying to make understood that the apostolate is not only the ecclesial service, in the context of parishes or movements, but is also and especially that in society, in structures related to politics, the world of work, the family and in the context of dialogue with young people, in all those other realities where it is urgent to bring the Gospel of Christ". This is what Fabrizio Calegari, missionary of the Pontifical Institute for Foreign Missions (PIME), said in an interview with Agenzia Fides, summarizing the challenges of the Bengali Catholic community. "With a spirit of service - he underlines - it is necessary to try to increase mainly the spiritual life of the faithful called to witness Christ in the dear areas of society".
More than fifty different ethnic groups coexist in the Asian country, more than half of these continue to practice Aboriginal traditions and animist cults, while a part of those indigenous communities has accepted the message of the Gospel. "Among these groups - notes the priest - most of the evangelizing activity of our missionaries takes place: every year we welcome many new baptized". Father Calegari worked in two PIME hostels in the diocese of Dinajpur which host children belonging to tribal minorities from poor families for twenty years, offering them human and professional formation: "In Bangladesh - he observes - thousands of young people, boys and girls, students, workers and unemployed are truly left to themselves, and no one takes care of them".
The PIME missionaries are in particular close to this part of the Indian subcontinent - ex Eastern Pakistan - the first three missionaries destined for Bengal, Albino Parietti, Luigi Limana and Antonio Marietti, accompanied by the catechist Giovanni Sesana, land in Calcutta at the beginning of June 1855 and on June 17 they arrive in Berhampur, sent by the Apostolic Vicar of the Bengali capital, on which they depend. "In 1910 - continues Father Calegari’s story - the mission begins among the indigenous population of the Santal. Other missionaries in those years dedicated themselves to the assistance of lepers".
Currently the communities of the Pontifical Institute for Foreign Missions are located in the dioceses of Dhaka, Dinajpur and Rajshahi. Dialogue with Islam, the apostolate and human promotion among the Santal natives are still the priorities of that missionary community in Bangladesh. Among the privileged channels for evangelization, Father Calegari highlights how education and work in schools play a fundamental role: "Our apostolate - he reports - passes through education: in this way we reach most of our faithful. We have many primary, junior and college schools, attended by 80% non-Catholic students. With educational works, Muslims, Buddhists and Hindus also learn to know and appreciate Christ".
Recalling that all the baptized are "missionary disciples", the missionary reports, one focuses today on the formation of the laity, called to give testimony of the Gospel in the structures of society.
Bangladesh is the fourth most populous Muslim nation in the world. About 90% of the 160 million inhabitants are Muslims, about 8% Hindus. There are about 600,000 Christians, 400,000 of whom are Catholics. (ES-PA) (Agenzia Fides, 8/2/2020)

AMERICA/HAITI - "The earthquake of 12 January 2010 taught us a few things": the testimony of a Redemptorist missionary