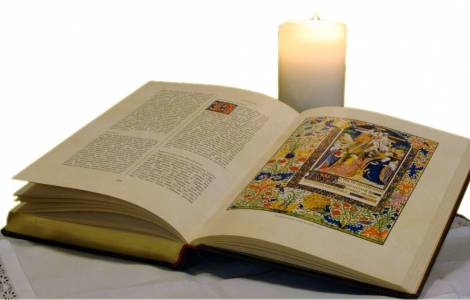 2020-10-28
Pope recalls violence in Cameroon: "May the guns fall silent and the safety of all be guaranteed"

Vatican City (Agenzia Fides) - "A day devoted to the Bible should not be seen as a yearly event but rather a year-long event, for we urgently need to grow in our knowledge and love of the Scriptures and of the risen Lord, who continues to speak his word and to break bread in the community of believers". This is the hope expressed by Pope Francis in the Apostolic Letter Aperuit Illis (n.8) with which he instituted the "Sunday of the Word of God" to be celebrated on the third Sunday of Ordinary Time, in 2020 on January 26. The Pope's exhortation finds a response in different countries of the world, with national, diocesan and parochial initiatives, of which Agenzia Fides cites only a few.
The coincidence of the 50th anniversary of the foundation of the Catholic Biblical Federation, in April 2019, and of the 1600th anniversary of the death of Saint Jerome, the great translator of the Bible, in 2020, gave the Federation the opportunity to call a "Year of the Word of God", from the first Sunday of Advent (1 December 2019) to the feast of St. Jerome (30 September 2020), inviting all those involved in the biblical pastoral care of the different nations, to renew their efforts to put ever more the Word of God at the center of the life and mission of the Church.
In Latin America, the month of September has long been celebrated as the "Month of the Bible" and is characterized by various initiatives in all countries, at all levels, to promote reading and knowledge of the Scriptures and their impact on the lives of Christians. This month was chosen because on September 30, the liturgy celebrates the feast of St. Jerome, and on this occasion "Bible Day" is also celebrated.
In Argentina, the National Department of Biblical Animation and Pastoral Care of the Episcopal Conference has elaborated a brochure for the animation of the Sunday of the Word of God, in which it recalls that this celebration does not replace the traditional "Biblical Sunday" which since 1961 has been celebrated on 30 September: "the Sunday of the word of God and the biblical Sunday complement and enrich each other, stimulating us in the following and missionary discipleship of Jesus Christ, which we know every time we approach the Scriptures with humility, where it manifests itself to us as Complete word of God".
The Bishops of Paraguay have proclaimed 2020 as the Year of the Word of God, "time of grace", adhering to the proposal of the Catholic Biblical Federation. In their message to the faithful they write: "We encourage all people, all parishes and chapels, all groups, movements and families to open the Bible, to read together some passages of the Word of God and to share what the Holy Spirit inspires them. In this way the lectio divina will burn our hearts and be a source of Christian life and commitment. May every family have a Bible! May the Word of God resound everywhere every day! May it be announced to all!".
The tradition of dedicating the month of September to the Bible also takes place in Africa. In Malawi during the last month of September, the faithful of the eight dioceses of the country were invited to read a passage from the Word of God every day, for a deeper knowledge of the Catholic faith and to be able to become heralds and witnesses. The children of the Archdiocese of Lilongwe were also called to read the Bible, to pray with the Bible and to preach the word of God in their daily lives, during Children's Missionary Day, 11 January. In Malawi the theme of the feast of the Pontifical Society of the Holy Childhood was: "Children are baptized and sent to preach the word of God".
Also in the Democratic Republic of Congo, September is the month of the Bible and various activities are organized to highlight that Sacred Scripture is the main source of the Christian faith. Among the initiatives promoted: a Bible for every family, if not for everyone; family and individual reading; biblical media broadcasts; biblical courses in parishes; meetings for young people, mothers, adults and leaders of the basic Church Communities to organize the reading of the Bible in their environments and to request greater attention to the Gospel proclaimed in the Mass.
The theme of the Bible Day, celebrated last December in Bangladesh, "Your word is a lamp for my feet, a light on my path" will be the leitmotif of the evangelization path of the Church in Bangladesh for 2020. Archbishop James Romen Boiragi, Bishop of the Diocese of Khulna and President of the Commission for Catechesis and the Biblical Apostolate, said: "In this new year we ask the Catholics of Bangladesh to know and deepen their responsibilities as baptized, who are sent to announce the Good News, according to the Bible. May the Bible become our light, make our life divine: this is my prayer".
The Commission is committed to promoting the biblical apostolate in all dioceses, assisting and collaborating in the preparation and dissemination of catechetical and biblical materials in local languages, providing training for catechists and teachers of the Catholic religion.
In the Philippines with the Presidential Decree 124 of 5 January 2017, President Duterte declared the month of January of each year as a "national biblical month", culminating in the last week of January as a "national biblical week". In this month, all Filipinos, including those who work in government offices, explains the Auxiliary Bishop of Manila, Mgr. Broderick Pabillo, are therefore invited to focus on the importance of reading and studying the Bible. The government recognizes "the religious nature of the Filipino people and the high influence of religion in human society". In the Philippines, "Sunday of the Bible" has been celebrated on the last Sunday of January of each year since the 1970s, in order to promote among Filipino Catholics the importance of the Word of God in the life and ministry of the Church and to support the biblical apostolate. (SL) (Agenzia Fides, 25/1/2020)

ASIA/PAKISTAN - Year of Youth in Pakistan: the Church presents the translation of the Bible in Urdu of the "Youcat" youth