ASIA/PHILIPPINES - Cardinal Tagle: "Announcing the Gospel means communicating the presence and compassion of Christ with life" 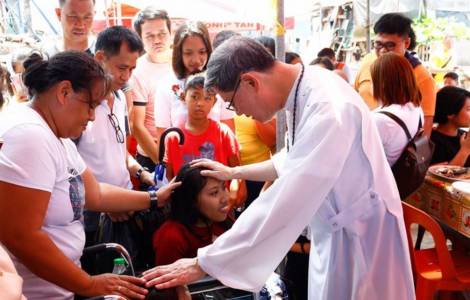 Manila (Agenzia Fides) - "The Holy Father sent me a message informing me of the new responsibility entrusted to me: I am grateful to him for the trust he has in me. I entrust my new service to the protection of the Blessed Virgin Mary": says Cardinal Luis Antonio Gokim Tagle, newly-appointed Prefect of the Congregation for the Evangelization of Peoples. The Cardinal intervened on 10 December in Manila at the inauguration of the "Veritas Institute of Social Communication", launched under the auspices of the Office for Social Communications within the Federation of Asian Bishops' Conferences (FABC). On the sidelines of the meeting, the Cardinal, despite his sadness to say goodbye to the population of the Archdiocese of Manila, which he led until today, he expressed his joy and reported: "I received messages from all over the world: from Africa, the Middle East, from Asian countries like Japan and Cambodia and from many other nations. This shows me that among the faithful there is enthusiasm for the work of evangelization".
Cardinal Tagle spoke of "communication and evangelization in the digital age". "Our common mission, in the sphere of communication and every area of life, is to go and proclaim the Good News. Go and proclaim the God who speaks, communicates and listens", he said. In the work of evangelization and, in particular, in the work of social communication, the Cardinal wanted to emphasize, it is necessary to "increasingly involve young people and women". The first "know the digital world better than us and can give us wonderful advice"; women, he recalled, "have a natural predisposition to interpersonal communication: let us also learn from them", he urged, above all referring to the "spirituality of listening". "Our part for evangelization - he said - is listening to God and listening to each other with patience, interest and attention. This is a necessary first step in evangelization".
On the pastoral challenges of evangelization in the digital age, he noted: "Living in the time of artificial intelligence, we Christians are called to develop other types or forms of intelligence, such as relational intelligence, which encourages a person to generate trust and safety".
Noting the need for the Church in Asia and for the universal Church of Christians ready to "give an account of the hope that is in them" and that they can be "witnesses and heralds of the Gospel", the Cardinal concluded: "Every Christian is called to communicate, with his life, the presence and compassion of Christ". (SD-PA) (Agenzia Fides, 11/12/2019)