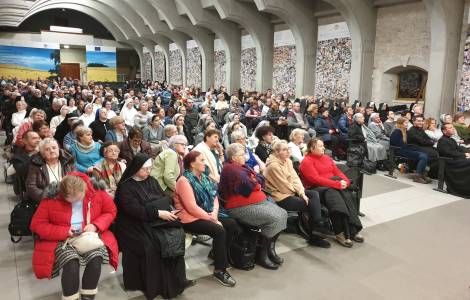 2019-08-19
Cardinal Filoni at the shrine of Zakopane: "Mary is present and alive among us"

Częstochowa (Agenzia Fides) - About 400 people took part in the Symposium and Missionary Vigil that took place in Chęstochowa from 7 to 8 December. The vigil for the evangelization of the world, organized by the Pontifical Missionary Union (PMU), was preceded by a Symposium that deepened the missionary spirit, and put the missionary work of the whole Church under the protection of Mary.
The meeting began with a Mass presided by the auxiliary Bishop of the diocese of Tarnow, Stanisław Salaterski, in the Chapel of the icon of the Madonna, according to the note sent to Fides by the Pontifical Mission Societies (PMS) of Poland. Immediately afterwards the participants gathered in the auditorium of the Sanctuary to listen to the reports of the invited guests on the relationship between the Eucharist and Mission. The work was opened by the National Director of the PMS in Poland, Mgr Tomasz Atłas, who commented on the slogan of the new pastoral year of the Polish Church, which has just begun: "The Eucharist gives life". Liturgy professor Fr. Tomasz Herc then underlined in his speech that the Eucharist, as the source and summit of Christian life, strengthens the missionaries in their call and sends them to the ends of the world.
Apostolic Administrator in western Kazakhstan, residing in Atyrau, Fr. Dariusz Buras, gave a testimony of the Church he serves. "Local Catholics, who are few, about 600, have maintained their faith, meeting only in small communities without priests, suffering persecution, until the arrival of missionaries. Great humility and patience are needed in this work and a great spirit of adaptation, because it is impossible to transfer Polish pastoral care to western Kazakhstan", said Fr. Buras. Finally, Mgr. Tomasz Atłas and Fr. Maciej Będziński shared the experience of visiting the missionaries in Gabon and Tanzania.
With the prayer of the appeal to Mary, the all-night prayer vigil began. The prayer of the rosary was animated by the group of the living Rosary of the parish of Christ the King in Jabłonów Pomorski, of the diocese of Torun, while the adoration of the Blessed Sacrament in the missionary spirit was led by the Claretian seminarians. During the night prayer, the missionaries who are preparing to leave next year and who are preparing for the missionary formation center in Warsaw, gave their testimony, asking for prayers.
At midnight, Mass was presided by the auxiliary Bishop of Wroclaw, Jacek Kiciński, followed by a night prayer, enriched by the songs of the Franciscan Missionary Sisters of Mary. PMU National Secretary, Fr. Luca Bovio IMC, who led the vigil, welcomed 4 new members of PMU. The vigil ended at 4 am, with a solemn entrustment of the whole missionary Church to the Black Madonna.
The meeting in Czestochowa was attended by people close to the missions, priests, nuns, seminarians, lay people and also many other people, especially the elderly and the sick, who spiritually joined in prayer from their homes. (MK/SL) (Agenzia Fides, 9/12/2019)

ASIA/SOUTH KOREA - Cardinal Yeom: "We entrust the brothers of North Korea to the Virgin Mary"