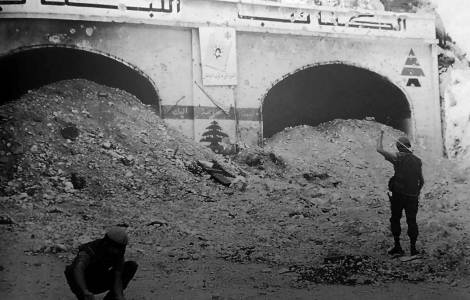 2020-01-29
Heads of Churches: no to street violence. Support for the new Lebanese government

2020-01-25
"Fratelli Project": Lasallians and Marists together to help Syrian and Iraqi children

2020-01-09
Maronite Bishops to Lebanese politicians: do not drag the country into the conflicts that are stirring the Middle East

2019-12-16
Patriarch Rai on the Lebanese crisis: "politicians have not listened to the voice of God"

Beirut (Agenzia Fides) - After the start of protest demonstrations that have shaken Lebanon since October 17, there is the prayer of the Holy Rosary in the church of the Maronite patriarchal see of Berkè every day, at five in the afternoon to invoke the gift of peace for Lebanon. The Marian prayer - to which yesterday, Thursday 14 November, an hour of Eucharistic adoration was added - is broadcast live from the Nursat television network throughout the Country, and is followed via social networks by the Lebanese spread all over the world.
The suggestion to pray every day for peace came from Patriarch Bechara Boutros Rai, who since the beginning of the crisis has called political leaders to listen to the legitimate requests that come from the people, and at the same time moves to stem all the drifts that could push the Land of the Cedars towards the nightmares of the past, those that had devastated the nation in the long and bloody years of the civil war.
In recent days, many have seen the ghosts of the past reappear on the horizon, especially when some groups of protesters engaged in organizing road blocks raised walls and barriers along some transit routes, precisely in places where during the civil war check points and barrier lines were located that dismantled the different areas of the Country on a sectarian basis,.
Especially the barrier created in the Nahr el Kalb tunnel, along the road that leads from Beirut to Jounieh, was impressive, from protesters with their faces covered to show leaflets with the face of Maronite Patriarch Nasrallah Sfeir (1920-2019), in an area inhabited predominantly by Christians. That place is well known in the Lebanese collective memory, because there was a barrier that cut in two the Lebanese territory on the waterfront during the civil war. The image of the tunnel completely closed with piles of earth during the war (see photo) has returned to being viral on social media, and many have read the new block built by protesters there as an expression of the typical language of the "mentality of militias", which threatens to resume the Country's scene, weakened by the economic crisis and political paralysis.
Yesterday, Patriarch Rai received Foreign Minister Gebran Bassil, leader of the Free Patriotic Movement, the party founded by former General President Michel Aoun and currently allied with Hezbollah's Shiite party in the patriarchal see. According to Lebanese television channel LBCI, the Maronite Patriarch also contacted the leaders of other Christian political formations, including the leaders of the Kataeb Party and Samir Geagea, leader of the Lebanese Forces, to remind them of the danger of a return to the past. The news of contacts between the Patriarch and Christian political leaders has been denied by sources close to the two parties, but there have been no official denials from the Maronite Patriarchate. Meanwhile, after the resignation of Prime Minister Saad Hariri, contacts between Shiite and Sunni parties have been confirmed to verify the margins of consensus around the Sunni figure Mohammad Safadi as the new Premier, to give life to an "emergency government". In the past, Safadi, of the "Future" Sunni Party; he had held the posts of minister of the economy and finance minister in previous governments led by Najib Mikati, Fouad Siniora and Saad Hariri himself (GV) (Agenzia Fides, 15/11/2019)

ASIA/IRAQ - Chaldean Patriarch Sako praises the pro-demonstrators position of the Ayatollah al Sistani: a "quick solution" to the crisis is needed

ASIA/SYRIA - Erdogan: churches destroyed in Syria will be rebuilt