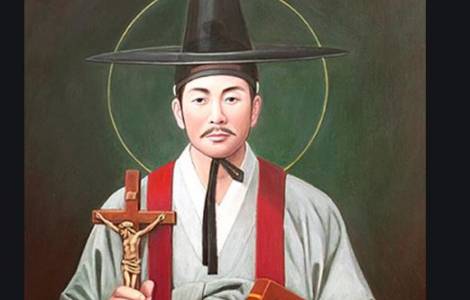 Paris (Agenzia Fides) - Unesco (the United Nations Educational, Scientific and Cultural Organization) recognized the patronage at the bicentenary celebrations for the birth of Andrew Kim Dae-geon (1821-1846), first Korean priest and martyr. As Agenzia Fides learns, during the 40th General Conference of UNESCO held today in Paris, there are Korean civil authorities and Bishop Lazarus You Heung-sik, at the head of the Korean diocese of Daejeon, representing the Korean Church at the ceremony.
At the annual meeting last October, the Korean Bishops announced the celebrations for the 200th anniversary of the birth of Saint Andrew Kim Dae-geon (21 August 1821), the first Korean Catholic priest, beheaded in Seoul on 16 September 1846, during the wave of persecutions launched by the Joseon dynasty. Saint Andrew is one of the 103 Korean martyrs canonized on 6 May 1984 by St. John Paul II.
In a joint question, the Korean civil authorities and the Catholic Church have asked the patronage of UNESCO for the important jubilee event, and the UN body has confirmed its support.
Bishop Lazzaro You says to Agenzia Fides: "This is an important recognition because Andrew Kim Dae-geon becomes a sign of unity and fraternity at different levels: for Korean society, divided between rich and poor, or polarized for political issues; for Korea as a whole, on its path of rapprochement and reconciliation between North and South, which has recently slowed down: for the whole of humanity, marked by conflict and tension, Andrew Kim is truly a universal example, not only of apostolate and holiness, but also of promoting the values of equality, justice, dignity and human rights, culture, education, reconciliation, fruitful exchange between different cultures".
In the Diocese of Daejeon, there is a shrine dedicated to the saint, who was ordained a priest in Shanghai and, once back in Korea, was killed "in odium fidei" along with his companions. Mgr.You remarks that "his example is a light for the faithful in Korea, who today are invited to take seriously the encounter with Christ and to put into practice the evangelical values, which are universal values, for the good of humanity".
The saint, recalls Mgr. Lazzaro, "was also a bridge between East and West as he knew how to speak and write in Latin, French and Chinese, and he left several works written in those languages. He was the first Korean ever, to study Western culture and languages and with his work, he contributed to broadening mutual understanding between the West and the East".
"Today - concludes the Bishop - what keeps the spiritual, moral, cultural, pastoral and social action alive are the six thousand Korean priests engaged alongside the poor, sick and vulnerable throughout the world". The celebrations for the Jubilee of the birth of Andrew Kim will begin in Korea in 2020 and will continue in 2021. Projects are also planned, in the name of the saint, in other countries of the world. (PA) (Agenzia Fides, 14/11/2019)

ASIA/KAZAKHSTAN - Pope Francis to Catholics: there is a hidden grace in being a "little flock"

AFRICA/D.R. CONGO - Civil society: "We want to have a say in the plan to withdraw the Blue Helmets"