AMERICA/NICARAGUA - Desecrated tombs of killed protesters; the Church calls for peace, justice and respect for all 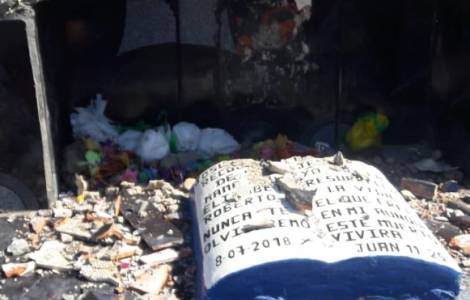 2021-11-22
Justice and Peace: "Everyone has the right to act in conscience and freedom"

2021-10-26
The Bishops recall "the basic and indispensable conditions in order to hold free, fair and transparent elections"

Managua (Agenzia Fides) - "We must respect tombs, because a saint rests there. For us here they are saints, here we have buried them and here we come to pray for them": said the Archbishop of Managua, Cardinal Leopoldo Brenes, on Sunday, November 3, inviting us not to continue to profane the tombs of protesters opposed to the government of President Daniel Ortega.
The tomb of one of the young people killed in one of the many protests against Ortega was profaned on the day of the commemoration of all the dead, Saturday 2 November. The family of Josué Mojica, killed on 8 July 2018 in Carazo (southwest), at the age of 18, published photographs and videos of the damage caused to the tomb. The boy's relatives, expressed their impotence and indignation to journalists. "What do they gain from damaging a tomb? They have already killed him, leave him alone", said one of his aunts.
The "Madres de Abril" Association, which brings together the relatives of the victims, such as the National Blue and White Opposition Unit, strongly condemned the continuing profanation of tombs of other young people. They also asked the authorities to investigate what happened on the day of the celebration of the dead.
Yesterday, November 4, the Archdiocese of Managua sent Fides a message of the Justice and Peace Commission for the closure of the Extraordinary Missionary Month, in which it invites the ecclesial community to be a messenger and promoter of peace and justice. "The objective of mission is to prepare people to receive Christ, his values and his way of living the building of the Kingdom, that is to say, living justice, forgiveness, love, service, but is this the society we are building?", reads the document.
"The current social, political and economic crisis exacerbates society on the verge of poverty, where the other has no value, has lost the right to live with dignity. There is no work, no education, no health service ... the economic and tax policy imposed, is not a response to the economic recession that the country is experiencing", reports the document. "Thus a nation cannot be built, with fear and pressure. An environment of trust, justice, freedom of expression must be created", concludes the text.
Since April 2018 Nicaragua has been experiencing a socio-political crisis that has caused more than 300 deaths (see Fides, 17/4/2019), according to the Inter-American Commission for Human Rights (CIDH), the number of political prisoners exceeds 700, to which is added a high number of young people and families who had to flee the country due to harsh repression (see Fides, 10/07/2019). (CE) (Agenzia Fides, 5/11/2019)

ASIA/IRAQ - Patriarch Sako to the Chaldean youth: in the Church, enlivened by Christ, your role is not "decorative"