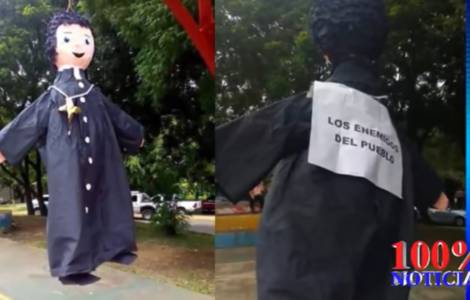 2021-01-12
"Politics is not the simple art of managing power, resources or crises", warns Bishop Álvarez, in the face of the increase in violence

2020-11-05
Towards the presidential elections with a divided opposition: Bishop of Matagalpa asks for more humility

Managua (Agenzia Fides) - The Catholic Church has three characteristics: one, holy, catholic and apostolic, but another characteristic is missing, which should be included in the Creed, that of being persecuted. This is what Archbishop of Managua and President of the Bishops’ Conference of Nicaragua, Cardinal Leopoldo Brenes, said after the Mass celebrated on Sunday 13 October at the Cristo Rey School in Managua. The comment arose in the context of the resumption of attacks against the Church by the ruling party. Fides, like other news agencies, received several reports on social networks regarding hatred towards the Catholic Church and priests, with macabre depictions of mannequins with hanged black cassocks.
However, Cardinal Brenes attributed these acts to "lazy boys, who have nothing to do" and who "seek to distinguish themselves because they have no other way". However, he acknowledged that the Church in Nicaragua is constantly under siege, more frequently after 18 April 2018, when Bishops, witnesses and mediators in the national dialogue, had proposed the exit of Daniel Ortega and early elections as a way out of the socio-political crisis of the country. Elections that had to be free, transparent and with full democratic guarantees, as stated by more than one member of the Church in these months (see Fides, 01/04/2019).
Father Edwin Román, parish priest of San Miguel church in Masaya, speaking on television ("100% Noticias") said that the intellectual authors of the attacks against the Bishops and against the Church in Nicaragua have gained "a higher step" as protagonists and promoters of this campaign. "The world must know who those who promote hatred in Nicaragua are, they are always the same authors of so many dead and must be stopped", he reiterated.
Father Edwin Román told the press that it is not just priests, but every good citizen who wants justice, freedom and democracy for Nicaragua: "It is enough to raise your voice to ask these things to be reported as enemies of the government. There is no need to prove it, as demonstrated by the number of brothers in exile", underlined the parish priest of Masaya.
In concluding his speech, Father Edwin recalled a reality: "The attacks that the Church is experiencing today exceed the attacks of those who were victims in the 1980s during the civil war in our country. In the 1980s there was the dictatorship of Somoza, this instead is a dictatorship against unarmed people". (CE) (Agenzia Fides, 17/10/2019)

AMERICA/CHILE - "Christ Migrant of the World": a year of help and support for migrants in the Archdiocese of La Serena