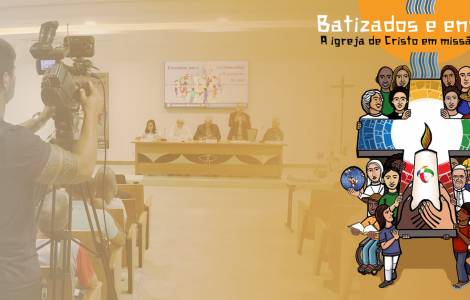 Brasilia (Agenzia Fides) - The National Conference of Bishops of Brazil (CNBB) and the Pontifical Mission Societies (PMS) yesterday launched, Tuesday 17 September, the Extraordinary Missionary Month and the Missionary Campaign 2019. The ceremony took place at the headquarters of the CNBB in Brasilia, in the context of the meeting of the Pastoral Episcopal Council (Consep). In addition to Bishops and priests, 23 missionaries from various countries attended the event.
At the opening, the Archbishop of Belo Horizonte and President of the CNBB, Mgr. Walmor Oliveira de Azevedo, said that "it is time to turn our gaze to the mission, to rekindle the awareness of this challenge in our hearts that is permanent for all". The president of the Conference of religious of Brazil (CRB), Sr. Maria Inês, highlighted that the CRB took this opportunity to motivate consecrated persons to deepen and increase the missionary dimension, since "this dimension is very strong for the consecrated life, in particular the mission ad gentes, the mission beyond borders". She also drew attention to the fact that: "There is no religious institute created for itself, except the contemplative life with its specific performances. Every sister, every monk has a profoundly missionary heart".
Mgr. Giovani Crippa, member of the Episcopal Commission for missionary action, underlined the purpose of the Extraordinary Missionary Month: to render the ordinary mission in the life of the Church. The Church in Brazil, in particular the local Churches, are invited to take up this great challenge with courage. The local Church is not a place where mission ends, but the place where the mission must start. "Mission comes from God, it is not something the Church has invented, mission is love", he said.
Sister Maria Irene, Councilor of the Pastoral Episcopal Commission for the Amazon, underlined the simultaneous celebration of the Synod for the Amazon, through which the Pontiff draws attention to the history of the territory. "I said last year, at the launch of the Extraordinary Missionary Month that it was a happy coincidence - the religious woman said.
Finally, Father Mauricio da Silva Jardim, National Director of the Pontifical Mission Societies, recalled that the missionaries are the first recipients of the meeting with Jesus: "He looked at us with pity, he looked at us with love, that is why we are here". He reiterated that the mission is born from a passionate heart, an ardent heart, motivated by spirituality and listening to the Word. "The mission is the place where we can meet Jesus, who speaks to us through his people and especially the poor, and we have much to learn" he pointed out.
After the launching ceremony of the 2019 Missionary Campaign and the Extraordinary Missionary Month, the exhibition "Missionary Faces", organized by the Pontifical Mission Societies, was inaugurated, presenting 47 "missionary faces", a small part of the large number of Brazilians scattered throughout the world sent on a mission. The ceremony concluded with a Eucharistic celebration presided by Archbishop Giovani Crippa. (CE) (Agenzia Fides, 18/9/2019)

AMERICA/COSTA RICA - The crisis for Covid-19 is worsening: the Bishops indicate a day of prayer on July 12