AMERICA/NICARAGUA - Week of prayer for peace and justice announced by the Bishops, in a tense climate 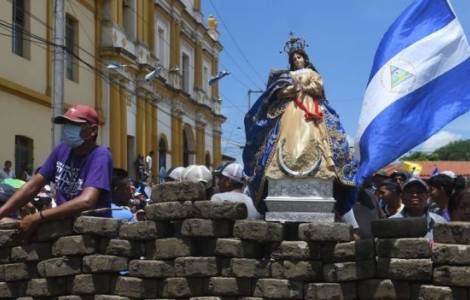 Managua (Agenzia Fides) - The Bishops' Conference of Nicaragua (CEN) has announced a week of prayer for the country with the motto "Justice and peace will kiss each other"; inspired by Psalm 85, which begins on September 8, feast of the Nativity of the Virgin Mary, and will end on the 15th, coinciding with the national holidays, inviting us to pray to God for peace and justice.
Mgr. Jorge Solórzano Pérez, Bishop of Granada, announced that the week will begin with a solemn mass in every Cathedral of the country, on Sunday 8 September. Each diocese will then be able to organize the week according to its own realities, even if the Bishops suggest that for each day a well-defined group is to be involved: Sunday 8: children and catechists; Monday 9: farmers; Tuesday 10: clergy, religious and pastoral workers; Wednesday 11: lay movements; Thursday 12: families; Friday 13: penitential celebration for all; Saturday 14: the sick; Sunday 15: youth and prayer for the authorities.
In this way, reports Fides source, it will be possible to pray throughout the country for the issues that the country is currently experiencing, such as the struggle for justice, freedom, the democratic life of the country and for the persecuted and unjustly imprisoned .
Agenzia Fides received an invitation from the Bishop of Matagalpa, Mgr. Rolando Josè Álvarez Lagos, to celebrate the "month of the homeland" without fear. In fact, on September 15th Nicaragua celebrates national independence. This is why Mgr. Álvarez Lagos invited everyone to display the flag, symbol of the homeland, during this week of prayer and throughout the month, exhorting "to make ours the sufferings of the poor, the hungry, those who are society's marginalized due to the arrogance of the strongest. And these are a large part of our population".
The week of prayer for Nicaragua will take place in an increasingly hostile climate towards believers due to the systematic harassment of Ortega’s regime against churches, bishops and faithful who criticize the dictatorship. In a recent interview, Mgr. Juan Abelardo Mata, Bishop of Estelí and Secretary General of the Nicaraguan episcopate, admitted that the Catholic Church feels persecuted by the military forces of the government, as was seen in Masaya (see Fides, 29/8/2019).
Mgr. Mata, in the same interview on August 26, updated the position of CEN regarding dialogue with the government: "Our position is that until there is no sincere search for truth and until there is the gentleman who is called president of this republic, with that mentality and his working group, every dialogue is and will be a disaster, there is no reconstruction of peace or nation building, dialogue does not mean that I do what you want or "I have to submit to your will or you to mine. No, it is to seek common points of agreement in order to promote the common good". (CE) (Agenzia Fides, 4/9/2019)