AMERICA/HAITI - Need to promote initiatives to overcome the crisis; the contribution of consecrated life to the life of the country 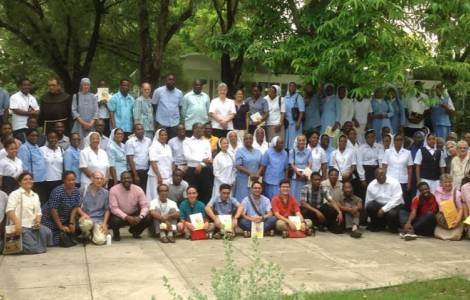 Port au Prince (Agenzia Fides) - From August 28 to 31 three representatives of CLAR, the Latin American Confederation of Religious, namely Sr. Daniela Cannavina, HCMR, (General Secretary), Sr. Mónica Benavides, HDV (Deputy Secretary) and Fr. Jean Hérick Jasmin, OMI, (of the CLAR presidency's team of theologians), visited the communities of consecrated life in Haiti. According to the note sent to Fides by CLAR, the objectives were: greater knowledge, to deepen the inspiring horizon of consecrated life of Latin America and the Caribbean, to listen to the voice of Haitian religious, to consolidate the commission for systemic change and to visit some projects of inter-congregational communities.
The missionaries, mostly religious women, carry out their mission in Haiti mainly dedicating themselves to the education of children, adolescents and young people, as well as assisting the elderly, in the health service (medical dispensaries). Some religious women work in professional training schools, as well as collaborating in the pastoral care of the parishes in which the communities reside.
With regard to the social and political situation, for the first time in Haiti, various branches of the opposition, from moderate to more progressive, came together to file the differences and promote strategies capable of dealing with the complex situation of the Caribbean nation, characterized by the significant deterioration in its socio-economic indicators. "It is a chaotic situation", said Chavannes Jean Baptiste, leader of the 4G Kontre platform, and one of the coordinators of the first Patriotic Forum for a national agreement to the local press.
Although the official figures indicate about 2.6 million people in conditions of food insecurity, "our analysis in the countryside and in popular neighborhoods, highlight that 80% of the population does not eat", Jean Baptiste informed. He also insisted on the situation of extreme violence, especially in the working-class neighborhoods of Port-au-Prince and in other cities of the country, as well as on poverty, hunger, unemployment and the mass flight of young people to other nations (see Fides, 10/6/2019). "The country is stationary, blocked", he complained, blaming the authorities for being responsible for the systematic degradation and plundering of national natural resources.
Although crisis in Haiti is not new, in recent years, with the deterioration of the national currency against the dollar, widespread unemployment has worsened, reaching almost 70% of the active population and restricted access to basic services such as health and education.
The political-social Forum that took place in the municipality of Hinche between 27 and 31 August proposed to respond to this situation and to reach a national agreement between the various forces that aspire to change the system, in addition to offering future prospects for the population and transform the lives of future generations. About 200 delegates from a hundred organizations, political parties, representatives of civil society and guests from Brazil, Argentina, the United States, the Dominican Republic and Venezuela attended the meeting. (CE) (Agenzia Fides, 02/09/2019)

AFRICA/MADAGASCAR - "Remain in the heart of Jesus": the Church thanks Pope Francis who "has traced a path"