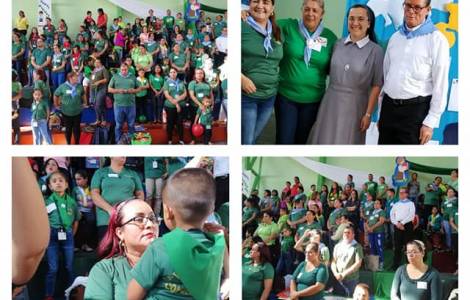 San José (Agenzia Fides) - On August 17th more than a hundred children participated in the National Meeting of Missionary Childhood and Adolescence (MCA) which took place in the Archdiocese of San José, Costa Rica, with the theme "Agradezco a Dios mi Bautismo y me comprometo mas con la Mision" ("I thank God for my baptism and I commit myself more to the mission"). The program of the day saw alternating moments of prayer, animation and formation, with the interventions of the different groups from the dioceses as well as the MCA National Secretary, Father Reyner Castro, and Sister Roberta Tremarelli AMSS, Secretary General of the Pontifical Society of Missionary Childhood (PSMC).
During the meeting, the prayer and song winners of the competition proposed by the National Direction of the Pontifical Mission Societies on the topic of the Extraordinary Missionary Month of October 2019: "Baptized and sent" were also presented. The Eucharistic celebration presided by Mgr. Daniel Blanco Mendez, Auxiliary Bishop of the Archdiocese of San Jose of Costa Rica, ended the day.
In Camaguey, Cuba, the National Congress of the MCA was held from August 20 to 22 with the theme "Somos bautizados y Jesus nos ha enviado" ("We are baptized and Jesus sent us"). In this country Missionary Childhood and Adolescence is present in all the dioceses and, together with catechism, constitutes the only possibility to animate and educate children and young people in faith and in the missionary dimension, proposing meetings, activities, service experiences and sharing.
The first MCA group was born in a parish in the diocese of Camaguey in 1993 and from there spread throughout the island, thanks to the missionary passion of priests, consecrated and animators who, during these 25 years, have involved children. An outstanding example is the prayer and offer of one's illness by a Cuban girl, who belonged to the MCA, Natalys Vidal Menéndez, and died in 1995 at the age of 16, animated by a great missionary passion. Until the last day of her life, together with the missionary children of Cuba, she repeated the slogan "Infancia Misionera llegará in Cuba entera" ("Missionary Childhood will reach the whole of Cuba"). Today she continues to be an example for all the young missionary children of the island.
During the Congress many and intense activities were carried out, in particular the group work with children and young people and the "meeting" with 4 witnesses of faith and mission: Abraham, Mary, St. Luke, St. Paul. The moment of sharing with the diocesan delegates and the MCA animators to better understand and understand the path that is taking place in each territory was very interesting. "I was able to breathe the vitality, hope and unity of the "small" ecclesial community of Cuba, which is called to be prayerful, incarnated and missionary", commented Sister Roberta Tremarelli, present at the Congress.
After the Congress, on 23 and 24 August, the Regional Meeting of the Secretaries of the MCA of Central America and the Caribbean was held in Santiago de Cuba as well as the meeting of the National Directors of the Region to verify and promote a unified and more effective journey, sharing not only the national realities of individual countries but also and above all the universal dimension. (CE) (Agenzia Fides, 30/08/2019)