AMERICA/NICARAGUA - Community calls for the release of political prisoners: a church besieged by police 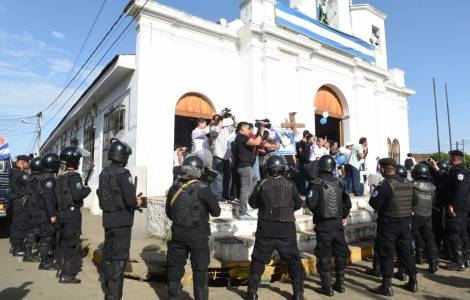 2021-07-09
New arrests, "may the will of citizens and the human rights of all Nicaraguans be respected"

2021-07-06
The Bishops: "Nicaragua is bleeding" due to repression, emigration, pandemic, hunger

2021-06-17
"The law is sovereign and not the will of men": the Bishops after the latest arrests of opponents

2021-06-08
Presidential candidate under house arrest: Cardinal Brenes asks for prayer for the judges

2021-02-22
Bishops to the government: elections, an opportunity to resolve the country's crisis

Masaya (Agenzia Fides) - We are witnessing the violation of fundamental rights and lack of security in the social life of the country, in a situation that is worsening day by day: this is what the Catholic Church and civil society are denouncing with regards to what is happening in Nicaragua: Father Edwin Román, parish priest of San Miguel Arcángel parish in Masaya, described the action of national police commissioner, Ramón Avellán, "contradictory" who on Wednesday, August 28, led an anti-riot police group to besiege the church of San Miguel in Masaya, where a holy mass was being celebrated to demand the release of political prisoners in Nicaragua. The action of the police happens only three days after agents guaranteed the security and the service of order during the ceremony in which Bishop René Sándigo took office in Leónt. "We all saw Mr. Avellán greet Bishop René Sandigo and here he does the opposite", said the priest, showing bewilderment.
As reported to Fides, the church of San Miguel, under the guidance of Father Edwin Román, has been surrounded by police officers, anti-riot police and paramilitaries since Tuesday afternoon. Last Wednesday's celebration was organized to call for the release of 126 political prisoners, as explained by the report of the Civic Alliance for Justice and Democracy in a note sent to Fides. Of the 126 political prisoners, 53 have been sentenced, 37 are on trial and 36 have been arrested. 75 are imprisoned in La Modelo prison, 38 in police stations and 13 in the judicial assistance office, known as El Chipote.
Despite the police siege, many friends and relatives of political prisoners and other Nicaraguan citizens reached the Catholic building carrying their Nicaraguan flag, blue and white balloons and banners with photos of prisoners. After the celebration, a group of believers secretly left the secondary exit of the church for fear of being arrested and detained.
Faced with this attitude of intimidation carried out by the police, the people of Nicaragua, together with the Church, look forward to the diplomatic path for a solution of the crisis. The Organization of American States (OSA) continues dialogue with the government to send a full delegation to Nicaragua and discuss the issue of early elections.
Since the demonstrations against the government began in April 2018, members of the Catholic Church have suffered aggression or have been provoked in different ways, because they are critical of the attitude of the authorities. Although the Catholic Church led the first attempt of National Dialogue (See Fides, 15/06/2018) the government of President Ortega accused the bishops and priests of being "coup leaders" only because they often assumed the defense of the weakest. (CE) (Agenzia Fides, 29/08/2019)

AMERICA/GUATEMALA - Bishops: "the sudden dismissal of prosecutor Sandoval, illegal and arbitrary, has caused irreparable damage to the country"

AMERICA/BRAZIL - 36 years after the murder of Father Ramin: by following his example, we renew our commitment to the poor and creation

AFRICA/NIGER - "Women pray that the sun never goes down, because jihadists attack during the night"

ASIA/MALAYSIA - Young people, "creative evangelizers" during the time of the pandemic