ASIA/INDONESIA - Congress of Asian theologians reflects on "Creation" and "salvation" 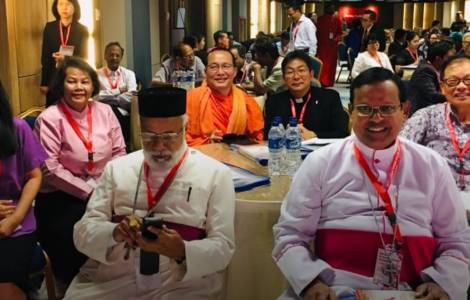 Medan (Agenzia Fides) - "Creation" and "salvation" are the theological themes at the center of the ninth Congress of Asian Christian Theologians (CATS-IX), the largest Pan-Asian theological summit, which opened on August 5 at the auditorium of Gereja Bethel Indonesia (GBI) in Medan, in the Indonesian province of northern Sumatra, and ends on 10 August. As Fides learns, more than 120 theologians of various Christian denominations, from all over Asia, are taking part in the Congress.
Rev. Agustinus Purba, Pastor and moderator of the "Gereja Batak Karo Protestan" (GBKP), an Indonesian Protestant community, gave an introductory speech based on the biblical text Genesis 9, 12-17. "The work of creation cannot be separated from the work of salvation. The order of the world is a vital space for all creatures and a space for meeting with God himself. The revelation of God, the design of creation and the salvation of human beings are closely connected. Human beings cannot know the Creator without knowing and recognizing its creation", he said.
Archbishop Willem T. P. Simarmata, moderator of the Christian Conference of Asia (CCA), opened the congress with an appeal to "restore and renew the order of creation", against the violence that can exist in human dominion on earth. Emphasizing the need for participatory and inclusive ways of living together, Msgr. Simarmata said: "We must intensify our commitment to justice and peace and safeguard Creation, in order to face contemporary challenges on the Asian continent".
Reverend Mathews George Chunakara, General Secretary of the CCA, asked: "Considering the enormous human resources, intellectual capacities, potential, opportunities for interactions and mutual exchanges available in Asia, what results have we had in presenting an authentic Asian theology?". Re-elaborating the theme "Reconciliation, renewal and reparation", he touched on various issues concerning the earth, life, human relations, security, peace and justice in Asia.
The Secretary General also added that the CCA will organize the Assembly of Asian Christian Women (AEWA) in November 2019 (on the theme "Reconcile, renew and restore creation"), while the next General Assembly of the CCA will be: "God, renew us in your Spirit and restore creation".
Father Clarence Devadass, Catholic delegate of the Federation of Asian Bishops' Conferences (FABC) said that the Congress is "one of the many collaborative efforts between the CCA and the FABC, and that it serves to transfigure the work of theologians in Asia".
On the agenda there are thematic presentations based on the main theme and on secondary themes, seminar sessions, biblical studies and sessions dedicated to interreligious dialogue. (SD) (Agenzia Fides, 7/8/2019)

ASIA/IRAQ - Chaldean Patriarchate: no decorated Christmas trees, no celebrations, out of respect for the victims

ASIA/TAJIKISTAN - The commitment of the Catholic community to the protection of Creation, also with the "culture of recycling"

ASIA/BANGLADESH - Asian Christian leaders to the government: "It is urgent to face the Rohingya crisis"

ASIA - Cardinal Bo: "At Pentecost, a new breath of the Holy Spirit to witness the Gospel in Asia"