ASIA/IRAQ - Five years after the flight of Christians, tensions between the army and paramilitary militias in the Nineveh Plain 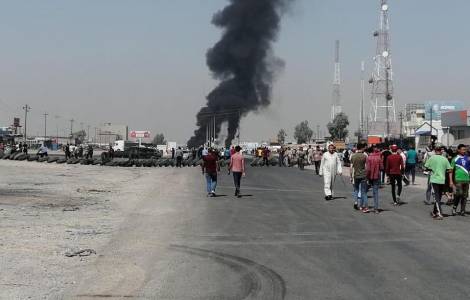 Mosul (Agenzia Fides) - Exactly five years after the mass exodus that emptied the villages of the Nineveh Plain in one night, that region known as the area of historical roots of indigenous Christian communities in the territories of present-day Iraq continues to be at the center of tensions and disputes between the national army and militias united on an ethnic and sectarian basis during the years of conflict with the jihadists of the self-proclaimed Islamic State (Daesh).
In recent days, the Nineveh Plain has become the scene of an insidious tug of war between the Iraqi army and the militiamen of Hashd al-Shaabi, the popular mobilization forces, formed mainly by Shiite paramilitary groups and considered close to Iran, that claim the non-secondary role it had in the fight against the Islamic State and in the liberation of Mosul from the jihadist regime that had established its base in Iraq from 2014 to 2017. Latent tensions exploded after the Iraqi army tried to take effective control of all checkpoints in the area, still largely controlled by the militia of the People's Mobilization Forces. On Monday 5 August, members of the mobilization forces along with groups of their supporters implemented a strategy of resistance against the inputs of the government of Baghdad, also blocking with tire burning (in the photo) the main roads connecting Mosul with other regions, starting with the one that joins the north metropolis to Erbil, capital of the autonomous region of Iraqi Kurdistan. The protesters also threw stones and blunt objects at Iraqi soldiers, preventing them from advancing and taking control of the checkpoints. The situation remains tense and contradictory rumors are circulating. On the one hand, the spokesmen of the Popular Mobilization Forces speak of an agreement reached with the government authorities and the army for a joint management of the military control of the area, to ensure stability and also to continue the search for former supporters and former members of the Islamic State that are appartently still present in the region, albeit in a secluded manner. On the other hand, Iraqi Prime Minister Adel Abdul Mahdi has confirmed the provision aimed at dismantling the armed garrisons controlled in the Nineveh Plain by Hashd al-Shaabi, and in particular by the 30th Brigade, to bring the security management in the region under the aegis of the government.
The clashes between the army and supporters of militia operating in the area confirms that the Nineveh Plain continues to represent an unstable area, above all from a security point of view. This factor also complicates the hoped-for return to the area of the tens of thousands of Christians who, on the night of 6 to 7 August 2014, were forced to abandon their villages in the Nineveh Plain, before the advance of the Daesh jihadist militiamen. Last July 1, Iraqi Premier Adel Abdul Mahdi issued a decree asking the independent paramilitary militias to close their offices in urban centers and to make a clear choice between the option of continuing to operate by July 31 as armed groups of local security and that of turning into political forces, accepting in this case to also close the offices of direct management of economic activities. The government provision issued on 1 July aimed to limit the growing influence of Shiite militias in large areas of the country, and so far does not seem to have clearly reached this goal. At the same time, the popular sectors that support the Shiite militias operating in Iraq link the restrictive measures of Prime Minister Mahdi with the pressures that the Iraqi government suffered from the USA and from regional powers such as Saudi Arabia, worried about seeing an increase of Iranian influence in Iraq. (GV) (Agenzia Fides, 7/8/2019)

AFRICA - Attacks in the Sahel are increasing: the bishops of Niger and Burkina Faso express concern