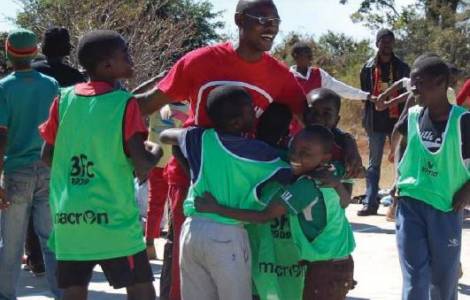 Vatican City (Agenzia Fides) - "Taking the responsibility of the other and taking care of him/her is the gift of spiritual fatherhood and motherhood that characterize Christianity as faith in the Trinitarian God, which is the mystery of an eternal giving of oneself by generating. Th e spiritual father and mother testify to the child the relational dimension of faith, widen the existential horizon of the person and gradually lead him/her towards the “measure of Christ”.
This is what Sister Roberta Tremarelli, General Secretary of the Pontifical Society of the Holy Childhood POSI, writes in the second issue of the Bulletin of the International Secretariat of the Pontifical Society of the Holy Childhood, highlighting the two main themes that are presented: "Spiritual fatherhood and motherhood deeply rooted in Christ" by Fr. Mikaele Tikoisuva, parish priest in the archdiocese of Suva, in the Fiji islands, and the "Spiritual motherhood and fatherhood of the missionary animator of children and adolescents of today" by Fr. Richard Zangre, of the Archdiocese of Ouagadougou, in Burkina Faso.
"Spiritual motherhood and fatherhood - continues Sister Roberta Tremarelli - are realized in accompaniment on the path of vocation and holiness, and this responsibility also concerns the missionary animator who is called to arouse and promote a complete growth of the person through faith and life integration. The missionary animator of Missionary Childhood and Adolescence in her spiritual motherhood and fatherhood is called to be a disciple, teacher and witness of Christ, only in this way will he/she be able to form missionaries. This responsibility is not only towards children and adolescents but also towards parents, as Pope Francis reminds us in Evangelii Gaudium".
Also this second issue of the Bulletin of the International Secretariat of POSI (see Fides, 15/3/2019), which has the date of July and is sent via email to the national Directions of the Pontifical Mission Societies around the world, confirms its objective to be an agile and immediate tool to learn about the universal reality of the Society, as its founder, Mgr. Charles de Forbin Janson, desired. The Bulletin, translated in five languages, contains studies, reflections, information, testimonies, experiences and initiatives concerning the world of children and their missionary commitment through POSI.
Ample space is therefore dedicated to the "voice of children", which reports in this issue the experience of the path of Discipleship proposed to children by the Italian diocese of Latina, Terracina, Sezze, Priverno; the impressions of the Filipino John Michael R. Tamonan who, in his school, presented "a show of Missionary Childhood, and the story of Luis Villamizar, missionary animator of Venezuela, then moving to the missionary Caravan of the children of Senegal. Other experiences and testimonies come from Ecuador, Mozambique, Brazil, Chad, Malawi. National Director, Fr. Benvin Madassery, SVD, talks about the revival of the Pontifical Mission Societies in Hungary after the communist regime, while the staff of the International Secretariat of POSI illustrates some of the projects that are supported by the Society in Papua New Guinea, Togo, Sri Lanka, Sierra leone. The events of particular importance that are reported concern the foundation of POSI in Romania and the Republic of Moldova. (SL) (Agenzia Fides, 17/7/2019)

EUROPE/SWITZERLAND - The Bishops launch the action of the Starsingers, under the sign of peace