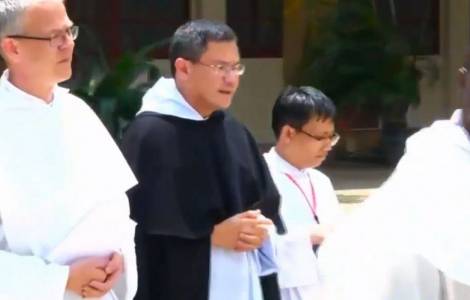 Bien Hoa (Agenzia Fides) - On 13 July Filipino priest, Father Gerard Timoner III was elected Master of the Order of Preachers (OP), or the Dominican Order, during the ongoing General Chapter of the order in Biên Hoà, Vietnam.
Belonging to the Dominican province of the Philippines, Fr. Gerard Francisco Timoner III is 51 years old and is the first Asian to be elected master of the Dominicans, 88th successor of St. Dominic of Guzman, for the next 9 years.
Fr. Timoner, who was a member of the Master for Asia-Pacific, comes from Camarines Norte, province of the Bicon region, in Luzon, Philippines, where he was born on January 26, 1968. He graduated in philosophy from the Philippine Dominican Center of Institutional Studies and his theology from the University of Santo Tomas (UST), in 1994. He was ordained a priest in 1995. In 2004, he finished his licentiate in sacred theology at the Catholic University of Nijmegen in the Netherlands. In 2014, Pope Francis appointed Fr. Timoner as member of the International Theological Commission. Among the other positions he held, he was prior of the Philippines province, vice chancellor and vice rector of the St. Thomas University in Manila and rector of the central seminary of the same university.
The 290th General Chapter of the Dominicans is taking place in the Seminary of Xuan Loc, in Vietnam, from 7 July to 4 August. It is the second General Chapter that is celebrated in Asia, the first was in the Philippines, in 1977. 104 capitulars with the right to speak and to vote, and 17 invited to represent the various branches of the Dominican Family and the Curia. The Dominicans are committed mainly to the ministry of preaching in various forms: popular missions, spiritual retreats, religious formation courses, social communication, teaching, study, scientific and cultural research, publishing. According to the Pontifical Yearbook the order counts 557 convents and 5,747 friars of whom 4,299 are priests. [(SL) (Agenzia Fides, 15/7/2019)