AFRICA/UGANDA - "We want the truth about the murder of Brother Mugarura", says Bishop Emeritus of Masaka to Agenzia Fides 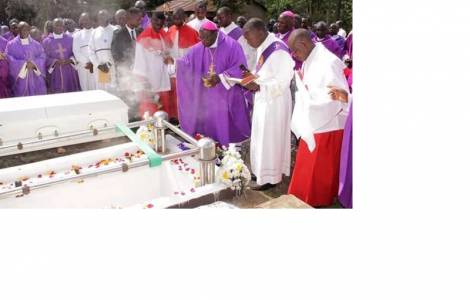 Kampala (Agenzia Fides) - "We are trying to verify the circumstances of the death of Brother Norbert Emmanuel Mugarura", says His Exc. Mgr. John Baptist Kaggwa, Bishop emeritus of Masaka to Agenzia Fides, with regards to the killing of Brother Mugarura, Superior General of the Brothers of St. Charles Lwanga (see Fides, 9/7/2019, in the article Brother Mugarura was called a "priest", but instead he was a professed religious).
"From what we learn, Brother Mugarura was going to a meeting in Kampala", said Mgr. Kaggwa, who reports that Brother Mugarura had a series of meetings in various places in the Ugandan capital.
"He stopped in Rubaga to meet one of his congregation members. Then the religious had another meeting at the church of Christ the King in Kampala. His travel plan included further stops in Namugongo and in Nsambya, at the headquarters of the ARU (Association of Religious of Uganda). However, he went missing from the moment he left the Church of Christ the King", says the Bishop. "He may have been abducted by someone and then taken to the University of Kyambogo, attended by Robert Asiimwe, a boy whose studies were financially supported by Brother Mugarura, from primary school to university", says Mgr. Kaggwa.
According to the police, it is in this student's room that Brother Mugarura was killed. It seems that the student wanted to take the religious’ car just to hide the body. But faced with the refusal of the employees of the Center to give him the car, he had to call a cleaning company.
"The doubt we have is: who gave Brother an appointment in the church of Christ the King? Did someone persuade the religious to go to the University of Kyambogo or was he led there by force?", asks Archbishop Kaggwa, saying he suspects there are other people involved in the crime.
Mgr. Kaggwa, who left office on April 16, said he was "embittered by the rumors running on social media, according to which the student killed Brother Mugarura to defend himself against harassment". "They are all lies touted to hide the truth and discredit the Catholic Church", says Bishop Emeritus. "We knew Brother Mugarura well and we have no doubts about his moral correctness. Since he had become Superior General of the Brothers of St Charles Lwanga in January, he had re-established the internal order in the institute, taking care of the spiritual part, and taking care that the vows of poverty and chastity were respected. If he were still alive he would have continued to do a great job", concluded Mgr. Kaggwa. (L.M.) (Agenzia Fides, 10/7/2019)

VATICAN - "The value of martyrdom as an element of Christian life in El Salvador": towards the beatification of the missionary Cosma Spessotto

AMERICA/EL SALVADOR - On the 40th anniversary of San Romero, the testimony of the faithful through social media