AFRICA/DR CONGO - "Hope of change in the Country is good, but now an ethical change is needed", the Bishops say 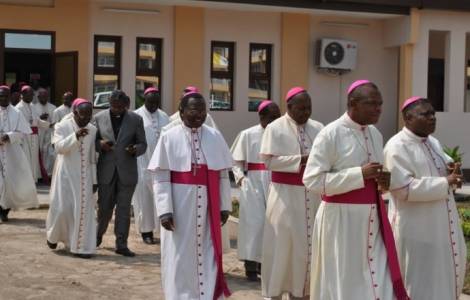 2020-06-30
Resignation of bishop of Popokabaka, Democratic Republic of the Congo, and appointment of successor

Kinshasa (Agenzia Fides) - "The elections of December 30, 2018 gave rise to a hope of change in the country", say the Bishops of the Democratic Republic of Congo in their message published at the end of their 56th Plenary Assembly. The repeatedly postponed Congolese presidential elections finally held in late December, were won by Félix Tshisekedi.
Despite the post-election controversy, the Bishops recognize that "people talk about a real break with the old system of government". "It is in this perspective that the first acts of the new President of the Republic should be greeted, including the opening of political and media space, the release of political prisoners, the return of political exiles to the country", the message said, sent to Agenzia Fides.
The Bishops complain, however, of the persistence of corruption in every area, even in the scholastic context where the sale of diplomas, the delays in organizing local elections, the failure of the national economy, which sees many families in poverty and "thousands of people, including an impressive number of children, living in serious food insecurity, in a fertile Country, rich in abundant natural resources".
The Bishops’ Conference also denounces the insecurity of the eastern regions of the DRC, due to the violence committed by various armed groups, some of whom are of foreign origin. "It is unacceptable that foreign armed groups establish themselves, train themselves and commit crimes in the DRC, without attacking their countries of origin against which they are supposed to rebel. People have the feeling of being abandoned. Everything points to the continuing destabilization and Balkanization plan of the Country, externally orchestrated with the complicity of some of our compatriots", the Bishops say, condemning the attacks on health centers that treat people affected by the Ebola epidemic, which in 10 months has killed 1,500 in the northeast.
The message concludes with the hope for a strong ethical change in the light of the Gospel, on a personal, social and political level, to give a real breakthrough in the management of the country. (L.M.) (Agenzia Fides, 25/6/2019)