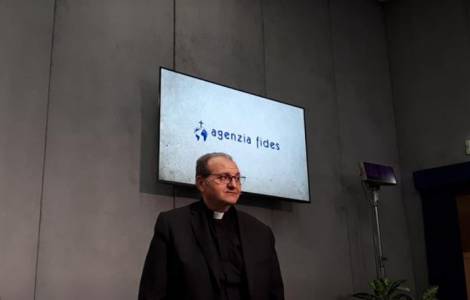 2020-06-20
"Forced like Jesus Christ to flee": living with dignity as refugees in the time of the coronavirus

2020-06-17
"The value of martyrdom as an element of Christian life in El Salvador": towards the beatification of the missionary Cosma Spessotto

2020-06-16
New aid from the PMS Fund for the Covid emergency in Africa, Asia and America

Rome (Agenzia Fides) - "After three years of meetings, visits, listening, study and research of ecclesial elements that could help us in an attempt to formulate proposals for reform concerning the Pontifical Missionary Union (PMU) and the International Center for Missionary Animation (CIAM), I believe the time has come to face a first round of discussion and discernment": this is how Fr. Fabrizio Meroni, PIME, Secretary General of the Pontifical Missionary Union, Director of CIAM and Director of Agenzia FIDES, began his report presented May 30 at the General Assembly of the Pontifical Mission Societies (see Fides 24/5/2019).
The original charismatic intuition of PMU (31 October 1916) and the motivations that led to the creation of CIAM (31 May 1974), that is, the formation for the mission of the Church (missio ad gentes) and the missionary animation of the entire People of God , "Continue to remain the reason for their existence and the nature of their commitment", pointed out Fr. Meroni, who continued: "It is a question of finding new operating methods that express their renewed missionary and formative identity in the light of the teachings of the II Vatican and the post-conciliar Popes, in an ecclesial communion where the Successor of Peter and the organisms at his service can animate and sustain a fruitful relationship between the Universal Church and the Particular Churches".
The General Secretary then pointed out that "the educational commitments to the mission are called to overcome any reductive unilateral movement from the North to the South" and therefore "a reasonable formation for the mission (missio ad gentes) and a fruitful missionary animation must serve the needs of ongoing formation that the local Churches have. Our formative interventions cannot be presented as a parallel activity, or of secondary importance, or of exotic and exclusive interest for missionaries only. By ongoing formation we mean everything that can interest growth, development, purification, solidity, the growth of Christian faith understood as a personal encounter with Jesus Christ, an affective and intelligent relationship with him in the Church, a communion of brothers and sisters".
In this perspective, PMU and CIAM are therefore called "to propose a missionary formation together with the particular Churches, which stimulate them to the need to assume their missionary responsibility towards their own peoples and lands, towards distant peoples and distant cultures. A formative service which, while showing itself to be useful to local needs, continues to stimulate, provoke and induce reflections, actions and commitments that seriously takethe relationship of mission that exists between faith and the world, between the Church and peoples with their cultures and religions. PMU and the CIAM are placed not only at the service of the local Churches, but together with the latter, they serve the only missio ad gentes of the Church towards the whole world".
Fr. Meroni therefore highlighted some areas to be priveleged in this journey of rethinking of the PMU and CIAM. First of all the Catechists, who in the local Churches "are the main actors in the work of evangelization". PMU could start collaborating with the local Churches in the initial and ongoing formation process of the catechists, who are "baptized faithful who live the ordinary dimension of the Church's mission in their ministry". In this way PMU "could animate missionaries and open horizons on the missio ad gentes of catechists and their formators. In this way missionary animation would not be a parallel and marginal activity in ecclesial life, but fully inserted within the real needs and concrete demands of the local community".
Young people, families, the world of work, as well as the media, traditional and social networks, represent as many fields of attention, formation and missionary animation. "Re-focusing Christian formation on a renewed Catholic theology of mission, together with interreligious dialogue open to the encounter with cultures, is part of the concerns of ongoing missionary formation", said Fr.Meroni.
"Being part of the ongoing formation of the clergy, especially diocesan, in agreement with the local Churches, presents itself as another great challenge and opportunity for missionary formation to which the PMU can contribute: serving an urgent local need under the direction of local priests and collaborate in the requalification of priestly life, opening it to the Catholic and missionary dimensions of the Christian faith and the priestly ministry".
For those who live in consecrated life, the PMU local formation activity should be particularly dedicated to the religious communities of consecrated men and women, locally founded and still of diocesan right: "PMU could collaborate with local Ordinaries and religious leaders for ongoing formation which, in the light of the Church's mission, helps to discern the authenticity of the charism, the fruitfulness of the apostolate and personal sanctification thanks to the charism". (SL) (Agenzia Fides, 1/6/2019)

OCEANIA/AUSTRALIA - The Pontifical Mission Societies: "The proclamation of joy of the Gospel is the mission of the Church in the world"