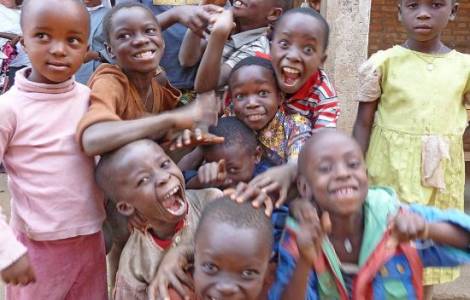 Rome (Agenzia Fides) - "The Society of the Holy Childhood or of Missionary Childhood favors a human and Christian education; helps children develop a missionary spirit, urges them to share faith and material means, especially with the most needy children; promotes, encourages and supports missionary vocations. It is an instrument of growth in faith, also in a vocational perspective". This is what Sister Roberta Tremarelli, AMSS, Secretary General of the Pontifical Society of the Holy Childhood (POSI) said in the report on the Society presented on May 30 at the General Assembly of the Pontifical Mission Societies (see Fides, 24/5/2019).
There are several challenges that the Society is facing today, and among these Sister Tremarelli mentioned: to educate children and adolescents to values; to educate to sharing; to promote educational itineraries that propose different vocations, including missionary ones; to involve families in animation and formation; to give continuity to the journey lived in Holy Childhood through the formation of adolescents; to integrate the missionary dimension in the pastoral program of Christian education and formation.
Sister Roberta Tremarelli recalled the celebration of the 175th anniversary of the Society, where "in different countries, almost everyone tried to emphasize this anniversary by proposing it as a common theme and involving children, young people, teachers, catechists, dioceses, spreading the news also through the media". With regard to the Extraordinary Missionary Month, the Secretariat proposed each national Direction to promote the competition "Baptized and sent: singing the mission", in order to involve children and young people in this extraordinary celebration. "Often the great ecclesial events - she explained - concern adults, and children are not considered as direct recipients or as protagonists and so each institution must put into practice the creativity under the guidance of the Holy Spirit to find a place in the Church for these children".
The General Secretary then highlighted her participation in some events: in Switzerland from 19 to 21 January for the 30th anniversary of the Starsingers, in the German canton; in Rwanda from February 23 to March 5 for the continental meeting of the National Directors and collaborators of the PMS; during her return back home she stayed in Brussels, and visited the PMS headquarters in Belgium; May 18 in Romania for the first celebration of Missionary Childhood Day. "After the General Assembly and the course for the new national directors - she continued - I will leave for DRC Congo for three formation sessions with diocesan directors and animators of Holy Childhood in three ecclesiastical provinces of the country".
Regarding the celebration of Missionary Childhood Day and the collection, Sister Roberta pointed out that despite the hope of Pope Pius XII, the Day "today is unfortunately not celebrated in some countries, because Bishops do not give it the right attention or because the National Direction does not propose it", and there are difficulties of various kinds for the collection, even if "some parishes and some dioceses, spontaneously, carry it out because they recognize its missionary foundation".
From the reports received, it appears that each PMS National Direction organizes assemblies and formation meetings for animators and coordinators of Missionary Childhood and Adolescence during the year, in this regard the Secretary General has invited "to persevere in formation" and to send the Secretariat the text files of the formation school for animators and the one for children,in order to be able to analyze and update them, so as to make them available for everyone.
After some clarifications regarding the presentation of the projects and the distribution of the subsidies, Sr. Roberta invited to use, for the initiatives of animation and missionary promotion of POSI, "photos of children in groups, smiling, and to avoid photos in which children appear dirty and hungry, in tears or naked. Our aim - she underlined - is not to move those who see or read and thus obtain an offer, but to involve the baptized in the missio ad gentes through prayer and cooperation, promoting support for particular churches because they are members of a single Body which is that of the Church".
Finally, the International Secretariat of POSI proposes holiness as a common annual theme for 2020, "a path to implement the gift received in Baptism to follow Jesus". "Age is not an obstacle to the achievement of sanctity - concluded Sister Roberta - and children can highlight it with their testimony of piety, fidelity and love for God". (SL) (Agenzia Fides, 1/6 /2019)