ASIA/LEBANON - The "kafala" system, an instrument of oppression for African immigrant women 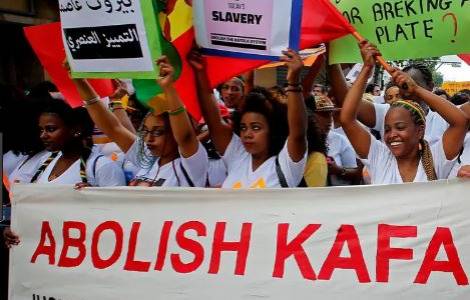 2020-04-27
Aid to families without income must be given priority, in the social crisis due to coronavirus

2020-03-25
"May Mary protect the world". Christians and Muslims pray together on the feast of the Annunciation

2020-03-18
Coronavirus, Lebanese churches offer residences and buildings for those infected and under quarantine

Beirut (Agenzia Fides) - Slaves and in an almost legal way. This is the fate of African women who have immigrated to many Middle Eastern Countries. Their dream of a better life is shattered against the "kafala". Migrant workers are recruited through a system of sponsorship known as kafala, which ties a migrant’s visa and work permit to their employer’s approval. Such a structure excludes migrant workers from national labour laws, a condition which makes them extremely vulnerable to exploitation and abuse. A Caritas project together with some Italian NGOs, however, is trying to get these workers out of a condition of unacceptable exploitation.
Employers have a power over them that goes beyond the relationship between employer and employee. 65% of women workers had experience with forced labor and slavery. Sexual violence, unwanted pregnancies, abuse, exploitation... The extremely low wages that the workers themselves report, stand at between $150 and $200 a month. According to the International Trade Union Confederation, there are over two million migrants affected by the phenomenon of kafala, which is common throughout the Middle East. In particular, in Saudi Arabia, Bahrain, United Arab Emirates, Jordan, Iraq, Kuwait, Oman, But it is in Lebanon that the kafala produces negative effects. In the country, it is estimated that 250,000 immigrant women, from Sri Lanka, Ethiopia, Bangladesh and the Philippines, are victims.
In Lebanon, some women manage to escape and find refuge in reception centers for migrant workers set up by Caritas. In the Olive, Pine and Laksetha shelters, a project has been set up by Celim, "Voluntary community for the world", Center for international politics, Catholic University of the Sacred Heart, Municipality of Milan and "International domestic workers federation".
"Our operators – explain the responsible of Celim to Fides - work to restore a dignified existence to women who have fled from their perpetrators. Protection is offered in anonymity. Hot meals are distributed and medical, psychological and legal assistance is offered. In these reception centers so many women find their identity again and little by little even a little hope".
Together with the first reception and assistance in Lebanon, the project includes a path of voluntary repatriation and reintegration in the countries of origin. "In three years we intend to host and help over 1,500 women in the shelters in Beirut and 30,000 in the prison in Adlieh". In parallel, in Ethiopia professional training courses are organized, to make migrants' rights known in order to allow them to build a life with their own resources.
The basic objective is the radical reform of the system. According to the NGO Human Rights Watch, it "must be modified to allow workers to change jobs or return to their countries even without the employer's permission. Countries in the Middle East (and those in the Gulf in particular) should recognize the crucial role of migrant workers in their economies and take steps to ensure their rights are fully guaranteed". (EC) (Agenzia Fides, 30/4/2019)

AFRICA - Religious women during the time of COVID-19: close to those who suffer

ASIA/BANGLADESH - Asian Christian leaders to the government: "It is urgent to face the Rohingya crisis"