AMERICA/VENEZUELA - Bishops' message: the challenge to build a nation that is the home for all, respecting dignity and human rights 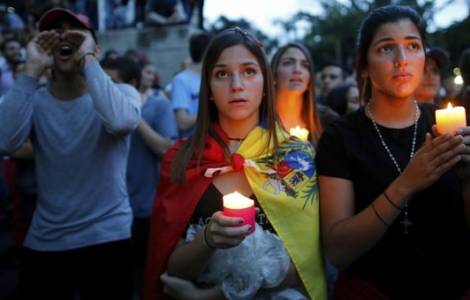 Caracas (Agenzia Fides) - "Given the seriousness of the situation we are experiencing in Venezuela, we Bishops, interpreting the cry and desires of our communities, have written several messages regarding particular situations of the different local Churches". This is how the "Message to the people of God and to all people of good will in Venezuela" begins, signed by the Presidency of the Venezuelan Bishops' Conference, with the date of 2 April. In the text, sent to Agenzia Fides, the Bishops reaffirm above all "the dignity of the human person and his inalienable rights".
The document therefore highlights the "crimes against humanity" that occur in Venezuela. These include the murders and the repression of the indigenous peoples of the Pemón and other ethnic groups; the forced deportation of Colombians and Venezuelans; imprisonment; torture of political prisoners; lack of access to food and medicine; arrest, detention or kidnapping by State forces ...
Faced with all this, "we invite the Armed Forces to feel part of a people that must be defended and served, acting according to their conscience", the Bishops exhort.
"We express our deep concern about the recurring black-outs at a national level which, among other things, further aggravate the supply and conservation crisis of food and medicine", they point out. Added to this is the worsening of the lack of drinking water in many areas of the country which, as a whole, "threatens to degenerate into a catastrophic health situation".
In the conclusion of the message the Bishops write: "At the end of Lent we can only celebrate the Easter of the Risen, authentic liberator of humanity, if all believers and people of good will join our efforts to shed light on the splendor of human dignity. "We urge those who are attacking their brothers with crimes against humanity to come out of darkness. It is necessary to build bridges and break the walls of division, to build a homeland that is the home for all. It is our challenge", they said.
The Bishops’ message comes a few days after the publication of the United Nations Report on Venezuela. Of the 29 million inhabitants, 94% currently suffer from extreme hunger and poverty. At least 3.5 million Venezuelans have already fled to Peru, Colombia, Brazil, Guayana and Suriname as well as Curacao and other Caribbean islands. School-age children no longer attend school and sick people cannot go to hospitals because everything is lacking. The number of those who die of lack of life-saving drugs of all kinds is growing every day.
A solution is suggested by the Archbishop Emeritus of Caracas, Cardinal Jorge Urosa Savino, who yesterday, in some statements to the international press, said: "This terrible crisis reflects the incapacity of the current rulers to lead the life of the country. They are simply unable to govern Venezuela". Therefore the "radical but peaceful solution to the crisis is that Maduro, already rejected by the majority of the population, stands aside and leaves the power that he is in fact occupying". "It is necessary to accept the interim presidency of the President of the National Assembly, Juan Guaidó, so that transparent elections can be held and a genuine recovery of the country can begin", the Cardinal concluded. (CE) (Agenzia Fides, 3/4/2019)