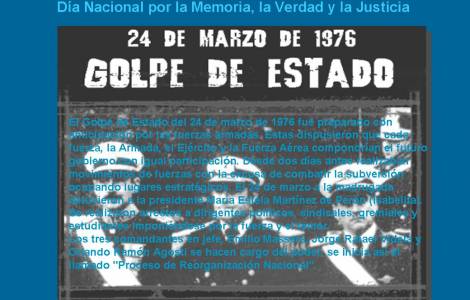 2020-06-17
"We are all Amazon": Mgr. Ojea calls for anti-Covid emergency measures also for the inhabitants of the Amazon

2020-05-27
"Affirming certainties and strengthening commitments": Mgr. Lozano at the Te Deum for the 210 years of independence

2020-05-23
In isolation, the media have opened up new mission paths: social communications Day

2020-04-21
Week of indigenous peoples: the pandemic is "further pain and suffering, among many delays and forgetfulness"

Buenos Aires (Agenzia Fides) - In Argentina, March 24 is now commonly called the "National Day of Memory for Truth and Justice" (Día Nacional de la Memoria por la Verdad y la Justicia), because it recalls the coup d'état of 1976, that is "the horror of violence, torture, murder, kidnapping, fraudulent business" are the words of Archbishop Jorge Eduardo Lozano, San Juan de Cuyo, who wanted to dedicate his weekly reflection on this date. In the request for prayers for peace and justice, Mgr. Lozano joined various bodies that work, together with the Church, for the defense of human rights.
Among these, Catholic Action (CA) has invited to dedicate some minutes to "remember how evil sows violence in the life of peoples and how painful the path of encounter in truth and justice is". In the message for this anniversary, CA reaffirms "its commitment to life and to the construction of the common good and social friendship, in a more just, fraternal and united society".
The text, sent to Fides, also remembers "the living memory of the martyrs of Rioja who will be beatified in a month, in particular Catholic layman Wenceslao Pedernera, victim of his faith in those tragic days, who asked his daughters 'not to hate' ". Pedernera, a farmer, organizer of the Movimiento Rural Catolico, was assassinated in his home by four hooded men who opened fire on him, in front of his wife and daughters, on 25 July 1976. He was immediately taken to hospital, where he died shortly after, he uttered words of forgiveness for his murderers and he told his wife and daughters not to hold grudges (see Fides, 10/24/2018).
In conclusion, the text of CA, after recalling the words of Pope Francis, before the date recalling the coup that removed the constitutional government, "giving rise to the most dramatic and bloody process in our history", invites us to "strengthen the awareness that violence and death will never be paths of peace and justice".
The "National Day of Memory for Truth and Justice" was recalled in several cities in the country. The diocese of Quilmes published a message in which it reports the violence of the past with the situation of vulnerable people today: "Memory helps us to connect the violence of yesterday and today, with its common goals: to maintain an unjust system that, supported by a multitude of poor, is enjoyed only by a privileged few" and warns: "The violence of yesterday and of today generates people who disappear, are excluded, are poor and are victims ... ". "To remember encourages us to find the traces of the Kingdom of God in history and to denounce all attempts to forget, lie and not do justice", says the communiqué. (CE) (Agenzia Fides, 26/03/2019)

AMERICA/BRAZIL - "Humanitarian catastrophe" in Brazil for the pandemic: complaint by the Venezuelan ambassador to the UN