AMERICA/HAITI - Redemptorist’s appeal: put the interests of the nation and the common good first 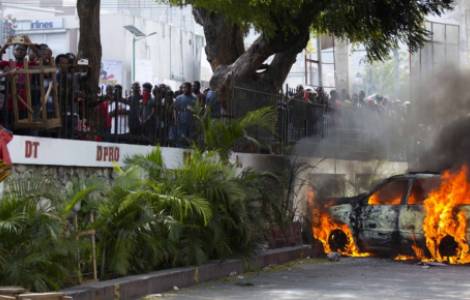 Port au Prince (Agenzia Fides) - "We ask for the public awareness of the various parties, even at the cost of great sacrifices, in order to put the common interest first": this is the appeal of the Redemptorist missionaries (Congregation of the Most Holy Redeemer) who have been living and working with the people of Haiti for years. A few days ago the Bishops of the Episcopal Conference had denounced in their message the serious situation: "The moment is serious, poverty increases, the common good is threatened. The country is on the brink of collapsing! This situation cannot last any longer" (see Fides 13/2/2019).
The text of the Redemptorists, sent to Fides by Father Renold Antoine, CSsR, regional secretary of the Redemptorists, is strong and clear in describing the situation of poverty, misery and chaos in which the Haitian people find themselves, following corruption at the highest levels of the government. Father Renold writes: "Haiti is the poorest country in the Western hemisphere. On this Caribbean island, over half of the 11 million people survive on less than $ 2 a day. According to data, 41% of the population is unemployed, two thirds work without contracts. However, for the past few weeks, the country has been experiencing a chaotic situation, vandalism and violent demonstrations. These protests call for the resignation of President Jovenel Moïse because he is incompetent, because he does not tell the truth. Corruption is therefore denouncced in which several authorities have been involved, including the current president. In addition there is the increase in the cost of living and street violence".
In this situation - the text continues - the government announced a reduction in the cost of basic necessities and has increased access to give credit for small businesses, measures that the population considers insufficient. The national government has also decided to set up a commission to facilitate inter-Haitian dialogue. However, it is believed that this Commission cannot do anything for the country. "What is worse - the Redemptorists write - is that we note with great sadness that the current opposition does not oppose either corruption, which is a cancer for the country, unemployment, the ineffectiveness of the State, or smuggling. Its only remorse is not being in power".
This is the appeal launched by the missionaries: "As a Congregation, together with the Episcopal Conference of Haiti, we invite the social and political protagonists to" join forces and intelligences to save our common boat, which is Haiti". We encourage you to find a wise solution that takes into account the superior interests of the nation and the defense of the common good. Haiti will be saved from dialogue when, sincerely, everyone will be able to participate and put common interest first". (CE) (Agenzia Fides, 01/03/2019)