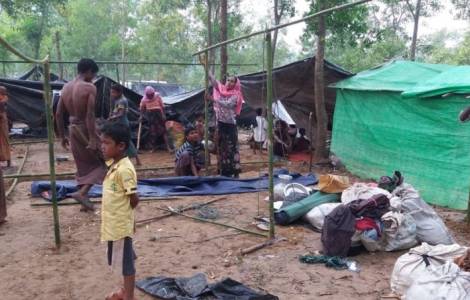 Cox's Bazar (Agenzia Fides) - The Federation of Asian Bishops’ Conferences (FABC) has urged the international community to find a diplomatic solution to the on-going Rohingya refugee crisis, who have fled from Myanmar to Bangladesh. More than 40 representatives of the Catholic Church from 11 countries in Asia visited Rohingya refugee camps at Cox’s Bazar, Chattogram, on the border between Bangladesh and Myanmar. As Agenzia Fides learns, the visit was planned within the international conference which focused on two main themes: the issue of refugees and that of renewable energy, analyzed in the Asian context. The Office of Human Development (OHD) of the FABC in collaboration with the Episcopal Commission for Justice and Peace of the Catholic Bishops’ Conference of Bangladesh (CBCB) and the Asia-Pacific Justice and Peace Workers Network (APJPWN) organised the international meeting from Feb 11 to 17 at Cox’s Bazar, Chattogram.
During the conference, the delegates had the opportunity to visit the displaced Rohingya people from Myanmar hosted in Kutupalong, Ukhia, Cox’s Bazar and interacted with some Rohingya refugees, listening to their issues and concerns. "The international community needs to have a united voice help Rohingya refugees and find an amicable solution to this crisis", said Bishop Allwyn D'Silva, auxiliary of the Archdiocese of Bombay and Executive Secretary of the Office for human development and climate change in the FABC.
"In spiritual unity with Pope Francis, who on 1 December 2017 met 16 representatives of the Rohingya community, we, too, were deeply moved by their stories and recalled what he said: Let us not close our hearts, or look the other way. The presence of God, today, is also called Rohingya", recalled Bishop D'Silva to Agenzia Fides.
"From this visit, we recognized the welcoming attitude of the people and the government of Bangladesh who opened their doors and hearts to the Rohingya. We appreciate their cooperation with many people of good will in responding to the immediate needs of the displaced Rohingya. We also commend the generous and professional assistance being provided to the displaced Rohingya by the Catholic Church in Bangladesh through Caritas with the support of the global Caritas family, together with other faith-based organizations, UN agencies and NGOs", noted Bishop D'Silva.
"We realise the constraints and hindrances of the temporary accommodation provided to the displaced Rohingya, as well as the challenges posed to the authorities in responding promptly and effectively to the humanitarian needs given the massive scale of the influx of people. We are particularly concerned about the vulnerability of many women and children and understand the numerous difficulties of the host communities", he said.
"We cannot but express deep solidarity with Rohingya refugees. The world community needs to act together to help them", added Father Charles Irudayam, an Indian delegate.
More than 740,000 Rohingya fled from Myanmar to neighboring Bangladesh after the violence registered in the Burmese state of Rakhine, where they resided, in 2016 and 2017. (SD) (Agenzia Fides, 18/2/2019)