ASIA/UNITED ARAB EMIRATES - "Neither arguments nor disagreements". The Pope indicates the path of the Beatitudes to the Christians of the Arabian Peninsula 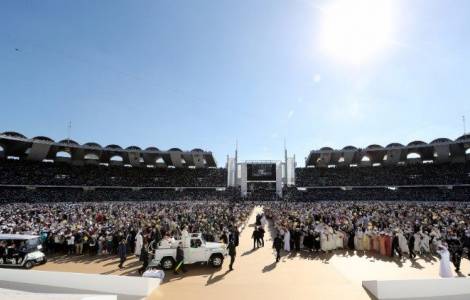 Abu Dhabi (Agenzia Fides) - The baptized "let them not get into arguments or disagreements, but be subject to every human creature out of love for God, and let them profess that they are Christians". This is the famous quote by Saint Francis, when he gave his brothers instructions about approaching "the Saracens and non-Christians", contained in the "Regula Non Bullata" was proposed again by Pope Francis as a way of presence to the multitude of Christians of the Arabian Peninsula who took part in the Mass celebrated by the Pontiff at the Zayed Sports City in Abu Dhabi, on the second and last day of his apostolic visit to the United Arab Emirates: more than 40 thousand faithful crowded the stadium, while another 90 thousand listened to Pope Francis outside the structure, in the most crowded Eucharist liturgy ever celebrated in the Arabian Peninsula that also recorded the respectful and intrigued participation of thousands of Muslims. "Neither arguments nor disagreements. And this - added Pope Francis - is also valid for priests. At that time, as many people were setting out, heavily armed, Saint Francis pointed out that Christians set out armed only with their humble faith and concrete love. Meekness is important: if we live in the world according to the ways of God, we will become channels of his presence; otherwise, we will not bear fruit".
The Pope’s homily started from the word "blessed": this is the word with which Jesus begins his preaching in Matthew’s Gospel. And it is the refrain he "repeats today, as if to fix in our hearts, more than anything, an essential message: if you are with Jesus, if you love to listen to his word as the disciples of that time did, if you try to live out this word every day, then you are blessed. Not you will be blessed, but you are blessed; this is the first truth we know about the Christian life".
This experience - the Pope continued - is the source of joy, "a joy that no one in the world and no circumstance in our lives can take from us. It is a joy that gives peace also in the midst of pain, a joy that already makes us participate in that eternal happiness which awaits us".
Continuing his homily, Pope Francis made specific reference and the singular profile of the Catholic community present in the United Arab Emirates and throughout the Arabian Peninsula, composed of immigrants from dozens of different nations, thanking those present "for the way in which you live the Gospel we heard. "You" stressed the Pope "are a choir composed of numerous nations, languages and rites; a diversity that the Holy Spirit loves and wants to harmonize ever more, in order to make a symphony. This joyful polyphony of faith is a witness that you give everyone and that builds up the Church. It struck me what Bishop Hinder once said: that he not only feels himself to be your Shepherd, but that you, by your example, are often shepherds to him". The condition of living far from home, shared by the overwhelming majority of members of the Catholic community of the Emirates - recognized the Pope - "is certainly not easy", where one not only misses the affection of your loved ones, and perhaps also feels the uncertainty about the future. But the Lord is faithful and does not abandon his people", reassured the Bishop of Rome". He "walks beside us and, if we continue to go forward, he will open up a new way for us; for the Lord specializes in doing new things; he can even open paths in the desert". The path suggested by Jesus, and prefigured by Him in the Beatitudes of the Gospel - added the Pontiff - "does not require dramatic gestures. Look at Jesus: he left nothing written, built nothing imposing. And when he told us how to live, he did not ask us to build great works or draw attention to ourselves with extraordinary gestures". The Beatitudes - continued the Successor of Peter "are thus a roadmap for our life: they do not require superhuman actions, but rather the imitation of Jesus in our everyday life". The Pope also compared the Christians of the Arabian Peninsula to the community of the Church of Philadelphia recalled in the Book of Revalation: "It is a Church which, unlike almost all the others, the Lord does not reproach for anything. Indeed, that Church kept Jesus’ word without renouncing his name and persevered, went forward, even in the midst of difficulties. There is also a significant detail: the name Philadelphia means brotherly love. Fraternal love. Thus a Church which perseveres in Jesus’ word and fraternal love is pleasing to the Lord and bears fruit. I ask for you the grace to preserve peace, unity, to take care of each other, with that beautiful fraternity in which there are no first or second class Christians". (GV) (Agenzia Fides, 5/2/2019)

AFRICA/UGANDA - Towards Mission Sunday - The National Director of the PMS: "The proclamation of the Gospel is a gift to be shared"

ASIA/PHILIPPINES - The Eucharist at the time of the coronavirus: a drive-in mass