AMERICA/ECUADOR - The Bishops: "We must all move from simple tolerance to true respect for others" 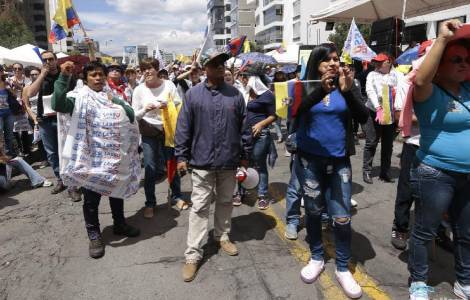 2020-05-23
Bishops: the health crisis has highlighted the problems that the State has never faced and solved

2020-04-16
Covid-19: the voice of mission among collapsing healthcare facilities, corruption and war scenarios

Quito (Agenzia Fides) - "Faced with the tragic episodes of forced displacement of people for social, ethnic and ambition reasons, which have caused great suffering to some groups, all together we must overcome evil with good; in other words, it is our duty to welcome anyone in need". This is what the Bishops of Ecuador write in a message addressed "to all the faithful and to all citizens in general" in which they recall the duty of welcoming those in need, and among them migrants: "We urge you to combat racism and xenophobia; the request to our immigrant brothers is that they respect the laws and cultural expressions that are living expressions of the country that welcomes them".
The message of the Presidency of the Episcopal Conference stresses that "emigration has become a global phenomenon that involves all nations, affects millions of people and poses challenges that the Church cannot neglect. It is important to stress that the most vulnerable immigrants include the undocumented, refugees, asylum seekers, displaced persons due to conflicts and the victims, mostly children and women, of human trafficking".
Faced with some recent episodes of racism and intolerance in the country, the Bishops invite parents, teachers and all the people on whom other citizens depend, to fight in all environments in which they work and develop their relationships, racism and xenophobia, and to instill the values of respect for life in all its stages and its manifestations, "promoting positive attitudes based on the social doctrine of the Church and on the fundamental rights of the human being".
"We all have to move from the simple tolerance of others to a true respect for their differences and thus turn egoism into generosity, fear into openness and rejection into solidarity. Furthermore, we ask immigrants to respect our country, which is the territory that welcomed them, as well as our people, our laws, our culture and our traditions. Let us respect ourselves as brothers and sons of the same Father, only in this way will social harmony reign".
The Bishops conclude their message by saying that "the path to the true acceptance of cultural and social diversity is difficult, and sometimes it is a real 'Way of the Cross' for both those who emigrate and for the host country, as shown by the latest events, but this should not discourage us as a society and as a Church, we must face these new challenges. It is the responsibility of all to generate and promote a culture of peace, justice, equity and freedom from violence". (SL) (Agenzia Fides, 30/1/2019)