AFRICA/CENTRAL AFRICA - Assault against the Comboni nuns: "The goal was the loot, not religion" 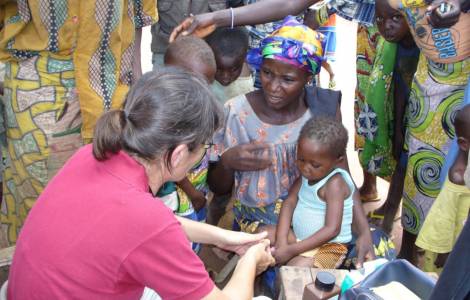 Bangui (Agenzia Fides) - "The assailants were common bandits. Small criminals who were looking for an easy loot to take away": this is how the Italian Comboni nuns summarize the assault suffered by the Foyer Community of the Comboni Missionary Sisters in Bangui (Central Africa), on January 5, 2019 (see Fides 7/1/2018).
"They were attacked and robbed by a gang of about 8-9 people ", continue the sisters who gathered the testimony of the religious sisters of Central Africa. "They entered the community and tied and gagged the three nuns, there were moments of great fear and violence". Central Africa is full of degenerates willing to do anything in order to have some money. Many former militias are drugged and therefore even more dangerous".
The mission was completely looted. The robbers also stole the nuns' personal watches. "The religious are traumatized, but are fine, they left the mission and took refuge in the provincial house, also in Bangui. It must be said that the neighborhood in which they live is particularly problematic. Everyone knows, even our nuns, but they have always wanted to stay there to share the hardships of the local population and to be close to the poorest and most needy".
The Central African Republic is a Country dominated by a low-intensity war that causes hundreds of victims. The instability began in 2012 when the Seleka rebel group broke out, mainly composed by Muslims, but also by mercenaries from neighboring countries, and attacked the country.
In early 2013, the rebels conquered the capital Bangui, forcing President François Bozizé to seek refuge in Cameroon. The conflict seemed to cease when the anti-Balaka militias opposed the Seleka rebels. This led to clashes throughout the territory that gradually turned into clashes between armed gangs, not so much for ideological reasons, but to control and loot local communities.
Not even Pope Francis’ visit, who opened the Holy Year 2015 in Bangui, succeeded in appeasing the clashes that, according to the latest Amnesty International report, have caused thousands of deaths and forced 538,000 people to take refuge in neighboring Chad , Cameroon, DR Congo and Congo and 601,000 to leave their homes to seek refuge in the quieter provinces of Central Africa.
At least 2.4 million Central Africans depend on humanitarian aid and 1.4 million are in conditions of food insecurity.
The Comboni nuns think there are no religious reasons behind the attack on the Bangui community. "We cannot exclude anything - they observe - but, considering the area in which the community is located, we believe it is a common crime act rather than a revenge by militiamen or former Muslim militiamen against a Christian community. The goal was the loot, not religion". (EC) (Agenzia Fides, 9/1/2018)

NEWS ANALYSIS/OMNIS TERRA - Deep social and economic crisis in Haiti: how to get out of the serious situation?

AMERICA/COLOMBIA - The Bishop of Buenaventura: violence has reached terrifying levels, people are afraid to denounce

EUROPE/ITALY - In time of Coronavirus, the commitment of the Blessed Scalabrini is always present, at the forefront of calamities