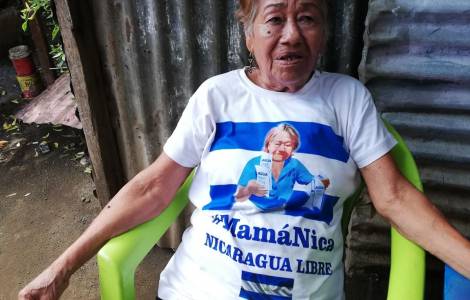 Managua (Agenzia Fides) - "The people who do not know their own history are condemned to repeat it" is one of the popular expressions in Latin America. In Nicaragua, since the beginning of the demonstrations against the government, the Ortega-Murillo regime has not spared arrests and violence regarding the elderly, and this was repeated last weekend. According to the National Center for Human Rights (Cenidh), there are twelve seniors, all over 60, considered political prisoners since the beginning of the repression.
The note sent to Fides recalls that the police of Ortega launched tear bombs against a protest of pensioners already in April 19, in Masaya, while the day before, April 18, Mr. Nicolás Palacios, 64, had been attacked by three sympathizers of Ortega, in León. These were the two key episodes that awakened the population, who from that moment took to the streets to protest. During the past weekend, Doña Coquito (Miriam of Socorro Matus, 76) was also arrested and taken to prison and released the same day. During these 5 months of socio-political crisis, President Ortega repressed demonstrators without discrimination, including children and the elderly.
The Catholic Church closely monitors the suffering of the Nicaraguan people, recalling that Catholics are also present in street demonstrations in a peaceful manner. Yesterday, Mgr. Silvio José Baez, Auxiliary Bishop of Managua, recalled through Twitter some words of the Gospel: "Go, behold I am sending you as lambs in the midst of wolves" (Lk 10: 3), and commented: "In a wounded and bleeding society, the believer should not be an extra wolf, but he cannot even be indifferent to the wolves who continue to sow death".
The situation in the country continues to be very tense: yesterday "The Blue and White National Unity", was established, an association of civil society organizations that includes entrepreneurs, students, farmers, professionals, human rights defenders and others, that called for a demonstration against the regime next Sunday, because, they underlined, "they will not leave the squares or the streets, because they belong to the people". The appeal is a clear challenge to the decision of Daniel Ortega’s dictatorship, who on September 29 declared illegal all demonstrations against him and threatened to prosecute those who call for demonstrations.
At an international level, the Magnistky Nica Act, which entails sanctions for Nicaragua, is already included in the work schedule to be discussed in the United States Senate: the magnistky law proposal refers to a concrete international situation, and must be presented when there are interests of the US and the democratic peoples in situations of urgent necessity. (CE) (Agenzia Fides, 05/10/2018)