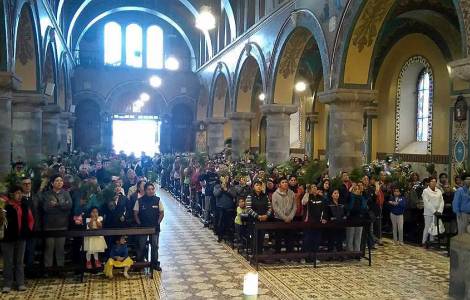 2020-01-17
Week of prayer for Christian unity: ecumenical meeting in Guayaquil on 24 January

2019-11-19
"One does not improvise to become martyr": the testimony of Fr. Moscoso, the first martyr of Ecuador

2019-10-24
After the protests: dialogue and reconciliation underway, with the mediation of the Bishops

Quito (Agenzia Fides) - Uncertainty and disorientation is causing the government of Ecuador to announce the reform of State bodies: the Ministry of Justice, Human Rights and Cult will in fact be part of the new Ministry of Security. This provision, which is still not in force, is part of the austerity measures launched by President Lenin Moreno to cut the costs of the State. The concern is that the National Council of Religious Freedom and Equality (Conalir), in which there are representatives of all religious realities and which has so far maintained contact with the Office for Cult, currently under the Ministry of Justice , will not have an effective reference point.
The note sent to Fides from local sources informs that at the end of August, representatives of various religious organizations met to analyze the situation, where, according to them, no attention was paid to religious communities. One of the main complaints is that an agreement regarding the law on religious freedom and equality has never been possible to reach.
The bill, discussed for more than three years, wanted to regulate the situation of churches and religions present in the country. Between 2009 and 2010 it was discussed, then filed by the National Assembly, in 2012, on the ground that the law "did not comply with the Constitution that recognizes Ecuador as a secular state".

During the meeting, a decision was reached to send a letter to the Presidency of the Republic, with the signatures of the various delegates, who exposed the concerns of the communities regarding the relationship between the faith of Ecuadorians and the state. In the past there were episodes of confrontation between religious groups, sometimes with tensions and clashes in Ecuador (see Fides 9/04/2013), in other circumstances the Catholic Church had to raise its voice to demand respect for the fundamental right to freedom of worship in the country (see Fides 16/11/2012). A new legislation in this regard could also control the real financial situation of religious groups.
For now, the only religious reality that has an established juridical status is the Catholic Church, through the "Modus Vivendi", a document that establishes diplomatic relations between Ecuador and the Holy See, of 24 July 1937.
Evangelical churches depend on institutions with offices in other countries. In practice, they have their legal head office outside Ecuador and are registered in the country as foundations and/or non-profit organizations (NGOs). "This is precisely what should be regulated", says Santiago Corrales, a lawyer with a specialization in tax matters. "The tax issue is an outstanding problem with some religious entities", he explains, citing the example of tithes on which there is no control or tax registration in any institution. (CE) (Agenzia Fides, 12/09/2018)