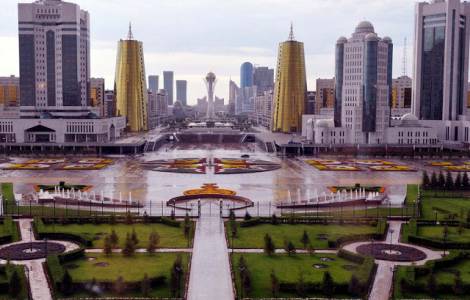 Astana (Agenzia Fides) - "In Kazakhstan, the principle of religious tolerance is at the basis of the constitution of the State. Kazakh cities are teeming with magnificent mosques and Orthodox churches harmoniously living together, but the religious aspect is relegated exclusively to the private sphere of the citizen: this approach is linked to a policy that has proved to be far-sighted". This is what was stated by Giannicola Saldutti, an associate researcher at the Institute of Advanced Studies in Geopolitics and Auxiliary Sciences, based in Rome, in an interview with Agenzia Fides. According to Saldutti, a scholar of Central Asia, "Nazarbaev was able to make a virtue out of necessity: immediately after the dissolution of the Soviet Union, the economic crisis and the deterioration of state institutions could have constituted a perfect catalyst for an inter-ethnic conflict of disastrous proportions in the heart of Central Asia (as happened, for example, in neighboring Tajikistan). As in many post-Soviet Countries, the Russian Orthodox community, the "minority", which in 1992 represented almost half of the population, paid the price. Kazakhstan has managed to ward off this unfortunate scenario by imposing a social model that sees in the recognition of the pivotal role of the State its milestone ".
The researcher emphasizes: "Visiting the Country and talking to people, one gets the impression of a sort of 'overlapping' of two 'cults': a public and dominant one, linked to loyalty to the State, to the law and to the iconography spiced by a certain cult for the personality of Nazarbaev; and a private one, strictly related to religion and ethnicity of belonging".
"On the other hand - he continues - there is an important fact to keep in mind: in a period of widespread radicalization of Islam, Kazakhstan has never been the scene of major terrorist attacks on the model of those claimed by ISIS in Europe, although the Islamic community represents the majority of Kazakh citizens. Without a wise social and inter-religious policy, ISIS would have been able to make easy proselytizing even in Kazakhstan as in the Arab world and in the Balkans", concludes Saldutti.
In recent years, the government has issued a series of measures that limit and control the activities of associations and religious communities: among others, the obligation to celebrate functions only in places agreed with the State or the installation of cameras in different places of worship because, in case of attack or violence, it is possible to identify possible authors. In Kazakhstan communities of different nationalities and religious confessions coexist: according to official data provided by the Kazakh Ministry of Foreign Affairs, out of 17 million inhabitants, 70% are Muslims, about 26% are Christians, 1% of whom are Catholics. (LF) (Agenzia Fides, 4/9/2018)