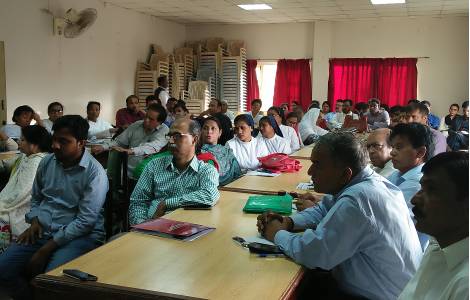 Lahore (Agenzia Fides) - Imran Khan, political leader of the Pakistan Tehreek-e-Insaf (PTI), winner of the recent general elections in Pakistan, has publicly announced that he wants to follow the legacy of Mohammad Ali Jinnah, the founder of Pakistan: this legacy implies the vision for which all citizens of Pakistan - including those belonging to religious minorities - enjoy the same rights of freedom, equality and justice. "These are words of Imran Khan during his first speech, after the vote, which strengthen the hopes of religious minorities living in Pakistan", says to Agenzia Fides, Fr. Qaisar Feroz OFM Cap, Executive Secretary of the Catholic Communications Commission in the Catholic Episcopal Conference in Pakistan. Fr Feroz also states: "If Imran Khan manages to do it, there will be a big change in the history of Pakistan and it will be a success of his government". The Secretary of the Commission notes that the political leaders of the Pakistan Tehreek-e-Insaf are genuinely well-educated and highly qualified politicians. "And if Imran Khan names the right people for government ministries, it will surely be a big step forward".
The general elections in Pakistan took place on 25 July 2018. According to the results announced by the Pakistan Electoral Commission, Imran Khan’s party, Pakistan Tehreek-e-Insaf (PTI), has totaled 116 seats in Parliament and can form the government. The Pakistan Muslim League Nawaz (PML-N) is in second place with 64 seats and the Pakistan People Party (PPP) won 43 seats and ended up in third place.
Together with the national government, the Pakistan Tehreek-e-Insaf will be able to form a government in the provinces of Khyber PukhtunKhwa (a province that it already governed) and in Punjab, a province that welcomes the majority of Pakistani Christians, led by PML-N for three decades.
Kailash Sarhadi, a member of the Sikh community, Secretary of the Interreligious Commission for Harmony of Pakistan (ICPH) and Director of "Masterpeace Pakistan" speaking to Fides says: "Pakistani religious minorities are rather favorable to Imran Khan. The leader believes in Islamic teachings and wants to give rights, freedom and justice to minorities in a similar way to what happened in Arabia in the times of Prophet Muhammad". And he continues: "During his first speech as head of the main political party in the 2018 elections, Imran Khan has won the hearts of many. The speech that was in Urdu language addressed and embraced every person in the country without any difference of caste, creed, ethnicity and religion". Kailash notes that Imran Khan has set up a centralized education system in Kyber Pakhtun Khwa province, he has built two hospitals and a university that work according to international standards and serve both the rich and the poor. He adds: "I am confident about the improvement of the education system and the health system in the country".
During his first speech, Imran Khan announced he did not want to stay in the Prime Minister's residence in order to reduce expenses. He also asked mass media and the offices of the National Accountability Bureau (NAB) to immediately report if any member of his political party is corrupt.
The losing political parties have said that the 2018 elections in Pakistan are "the worst in history". But the organization "Free and Fair Election Network" (FAFEN), an independent NGO that evaluates and promotes free and fair elections all over the world, declared the 2018 general elections in Pakistan better than the year 2013, calling them "free and transparent", despite complaints related to the process of counting votes.
Christian Haroon Imran Gill, member of the provincial assembly (MPA) of the province of Punjab and winner of the seat reserved for minorities in the PTI speaking to Fides said: "I am pleased that Imran Khan won the elections: he is a very passionate leader in taking care of the rights of religious minorities in Pakistan. He is an international personality who will know how to work to improve the situation of religious and oppressed minorities in Pakistan". (AG) (Agenzia Fides, 6/8/2018)