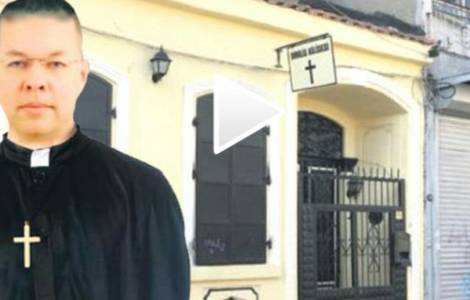 2020-05-15
Erdogan: Armenian and Greek "lobbies" conspire against the Turks even during the time of the pandemic

2020-05-06
Christian doctor Murat Dilmener, the "doctor of the poor" dies from coronavirus

2020-04-08
COVID-19: Christian foundations contribute to funds for the solidarity campaign wanted by Erdogan

Ankara (Agenzia Fides) - The US Treasury Department will implement "targeted" sanctions against two senior Turkish ministries, that of Justice - led by Abdulhamit Gul - and that of Interior - led by Minister Suleyman Soylu - as a form of retaliation for the detention of American evangelical pastor Andrew Craig Brunson, on trial in Turkey on charges of espionage and participation and terrorist acts and anti-Turkish subversive plots. "We believe that he is he is a victim of unfair and unjust attention by the government of Turkey", said White House spokesman Sarah Huckabee Sanders to reporters referring to Brunson, indicating that the ministerial bodies are about to be hit by US sanctions as direct responsibles for the arrest and detention of the pastor. "The unjust detention of Pastor Brunson and the continued prosecution by Turkish officials are simply unacceptable", said Treasury Secretary Steven Mnuchin, adding that President Donald Trump had unequivocally expressed the US expectations for the immediate release of Brunson by Turkey.
The case of evangelical pastor Brunson accentuates his profile of "casus belli" between the two countries already allied in NATO. Last week, as reported by Fides (see Fides, 28/7/2018) - Brunson after nearly two years in prison was able to return to his home in Izmir, under conditional freedom, waiting to know the sentence of the trial brought against him by the Turkish authorities, but the entry into force of the new measure concerning the defendant coincided with a new escalation of the clash between the US and Turkey around an affair that has long gone beyond the boundaries of an individual case, becoming a real geopolitical emergency.
The US President Donald Trump himself on Thursday 26 July, on his twitter account, defined Brunson "a great Christian, a family man and a wonderful human being" subjected to serious suffering, demanding his immediate release. "US Vice President Mike Pence also intervened on the case, repeating that Brunson is an innocent man, that there is no credible evidence against him, and threatening "significant sanctions against Turkey "if no concrete steps were taken to speed up the release. A few hours before the announcement of US sanctions, Turkish President Recep Tayyip Erdogan from Ankara, had declared to media operators that Turkey would not take into consideration the threatening language "of the American leaders, calling it an expression of "an evangelical and Zionist mentality".
Andrew Craig Brunson, at the head of the Evangelical Church of the Resurrection in Izmir (Smirne Diriliş Kilisesi), affiliated with the Presbyterian Evangelical Church of Orlando (Florida), had been summoned by the Turkish immigration office in October 2016, together with his wife, Lyn Norine (see Fides, 11/4/2018). The couple was initially informed of the obligation to leave Turkey, justifying this measure with the vague accusation of having received funds from abroad to finance missionary initiatives and to have endangered the security of the Country with their activities.
Subsequently, the Turkish press reported that for the evangelical pastor the expulsion decree had turned into an arrest, after a secret witness had accused him of belonging to the so-called FETO -Turkish acronym of "Fethullahnista terrorist organization", definition with which pro-government Turkish organs indicate the Gulen network and indicated by the Turkish government as the mind behind the attempted coup of July 15, 2016.
On September 28, Erdogan himself had declared himself ready to release the US evangelical pastor only if in return the US authorities will hand over to Turkey Fethullah Gulen, who has been exiled to the USA since 1999. Over the course of time, the crimes attributed to Pastor Brunson by the Turkish judiciary authorities have terribly increased: secret and enigmatic witnesses taken into consideration by the court in Izmir have even accused him of supporting the emergence of a phantom "Christian Kurdish state" destined to occupy part of the Turkish territory.
The court in Izmir on Tuesday again rejected a petition filed by Brunson's lawyer to demand the release of his client. The next hearing is scheduled for October 12. (GV) (Agenzia Fides, 2/8/2018)