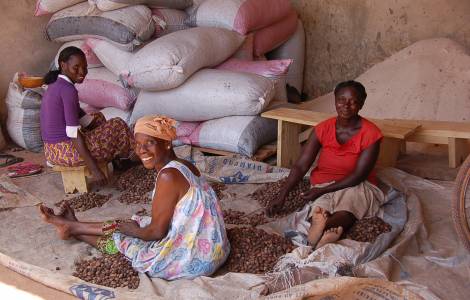 2020-04-15
Cardinal Ouédraogo: "I hope for a wave of international solidarity to fight the coronavirus"

2020-02-20
A catechist killed in the north of the Country. Out of 6 parishes in the diocese of Dori, 3 are closed due to terrorism

Dioulasso (Agenzia Fides) - Burkina Faso, like the neighboring States of the Sahel area without natural resources, is among the poorest countries in the world. The population lives on the little agriculture that the land has. The seven months of drought and the only rainy season allow only one crop a year. Burkinabés feed on corn, millet, rice, peanuts, and ignam.
The Missionary Sisters of Mary Immaculate, known as "Pianzoline" from the name of their Founder help these precarious people, who at the end of the month will have the joy of having the first perpetual professions in Dioulasso. "This is a great event – says Father Silvano Galli, a missionary in Togo, to Agenzia Fides. The community lives in Bobo-Dioulasso, the first capital of Burkina Faso, a state that borders with the Ivory Coast and Mali, and is part of the parish ministry. The nuns, also known as Pianzoline, are also responsible for a Center for sewing and embroidery work that involves young people and women from the surrounding area, in the manufacture of handicrafts. Another task entrusted to them is to follow and accompany young women in vocational research, who wish to know and live their charism", the priest adds.
Accompaniment, action for social and economic development (microcredit) for the transformation of local products, financial support to encourage the inclusion of children and young people in the world of work, support for families with orphans or abandoned children, assistance and care regarding the elderly, sick people, are some of the planned activities that the Missionaries will offer to the Burkinabè.
The first community of the Missionary Sisters of Mary Immaculate was born in Mortara, province of Pavia (Italy), diocese of Vigevano, May 8, 1919. It consisted of six sisters, gathered in the name of Mary Immaculate, who were united by the charism of providing juvenile religious education. The first six sisters, and most of those who joined them within a few years, were new to religious life but not to the mission to which the Founder, Blessed Francesco Pianzola, destined them. They were sent to the farms, the furthest from urban centers to visit and meet the most humble and marginalized people, with particular attention to the young and women (especially immigrant workers for seasonal work in the rice field) to announce the word of the Gospel in sign of solidarity and participation to people's problems. They have thus become presences of the local Church and 'missionary animators' in those human and social spaces in which the particular church, with its ordinary structures, could not penetrate. (SG/AP) (Agenzia Fides, 17/7/2018)