AMERICA/COLOMBIA - Venezuelan refugees at the center of the Church's attention 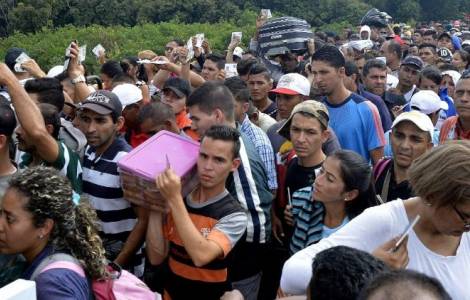 Bogota (Agenzia Fides) - From 17 to 24 June, on the occasion of the World Refugee Day which is celebrated on 20 June worldwide, the Colombian Catholic Church will host about 300 migrants, mostly Venezuelans, for a lunch of solidarity and will provide them with cleaning kits. The initiative is animated by "Red Clamor Colombia", created in 2017 to coordinate the pastoral work of various organizations of the Catholic Church in America and the Caribbean, in the context of reception, protection and integration of migrants, refugees and displaced persons. It is also part of the global campaign "Share the journey", launched by Pope Francis.
Pope Francis himself recalled the Day during yesterday's Angelus, hoping that the States involved in the consultations for the adoption of a World Pact on Refugees "will reach an agreement to ensure, with responsibility and humanity, the assistance and protection for those forced to leave their own country", and recalled that "we are all called to be close to refugees, to find moments of encounter with them, so that they can better integrate in the communities that receive them".
According to the statement sent to Agenzia Fides, on 19 June the Community of the Adoring Sisters in Bogota will host a group of 15 migrant women who find themselves in situations of vulnerability and economic precariousness, exposed to violence, discrimination and sexual exploitation. On 20 June, the Scalabrinian Missionaries organized the celebration of a Mass at the Center for Migrants of the Archdiocese of Bogota, followed by lunch for 80 Venezuelan and displaced Colombian immigrants. On 21 June the Archdiocese of Bogota will offer a fraternal lunch and some cultural activities to 150 Venezuelans who have emigrated. Moreover, in this week of solidarity, the Latin American Episcopal Council (CELAM), Colombian Caritas, the Jesuit Refugee Service in Latin America and the Caribbean, the Latin American Conference of Religious (CLAR), and the Benedictine fathers will offer kits for hygiene to the participants.
These initiatives are part of the project "Puentes de Solidaridad - Integrated Pastoral Plan for Assistance to Venezuelan Migrants in South America" in response to the appeal launched by Pope Francis. Eight Episcopal Conferences of South America joined forces to find solutions to the massive emigration of Venezuelans fleeing their country. In Colombia, the project supports vulnerable migrants with psychosocial and spiritual assistance and support, including advocacy actions, as well as developing meetings for reflection and possible interventions regarding the humanitarian crisis of Venezuelan migrants. (SL) (Agenzia Fides, 18/6/2018)

AFRICA/KENYA - After the Bishops, the Jesuits also say "No to the closure of the reception camps"