AFRICA/CAMEROON - Humanitarian crisis in the English-speaking area of the country: Bishops exhort to dialogue 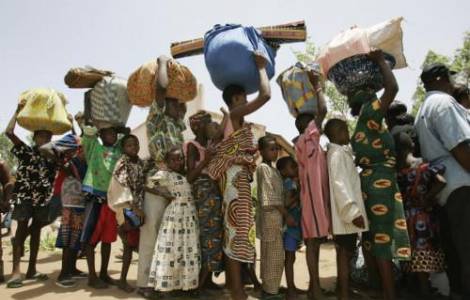 2021-12-20
The Archbishop of Bamenda: attacks intensify, with great suffering of civilians

2021-11-27
Appointment of the Bishop of Bafoussam, Mgr Paul Lontsié-Keuné

2021-10-18
Spiral of violence in the English-speaking regions, the Bishops: "Life does not seem to have any more value"

Yaoundé (Agenzia Fides) - The Bishops of Cameroon denounce "gruesome violence" while 160 thousand people are forced to flee to Cameroon and another 26 thousand to Nigeria. Caritas Cameroon reports "areas of conflict persecuted by fear and death". Soldiers "are burning villages, people live in the forests, they risk being killed if they even approach the edge of the road", reads a note sent to Fides by the local episcopate.
The Catholic Bishops of Cameroon have expressed their enormous concern condemning "the brutal repression of the army against an independence movement in the English-speaking regions of the country" that has fueled an escalation of humanitarian crisis.
It is a situation "marked by blind, inhuman, monstrous violence and by a radicalization of positions that alarm us a lot", the Bishops say in a declaration of May 16, signed by Archbishop Mgr. Samuel Kleda, President of the Episcopal Conference of Cameroon.
"Let us stop all forms of violence and let us stop killing each other", the letter says. "Let us save our country from an unfounded and useless civil war".
No journalist is allowed to enter the conflict areas, but Caritas Camerun estimates that at least 150 people, including 64 civilians have been killed so far in the guerrillas between the army and separatists. The actual figures are probably much higher. Eyewitnesses who fled to Nigeria reported arrests and murders, torture of suspected separatists, violence against children and rape. "Not a week goes by without houses being burnt, people kidnapped or killed", writes Caritas Mamfé of southwest Cameroon, epicenter of the crisis.
"Fear has taken over this territory". Caritas launches an urgent fund-raising campaign "to help 5,000 refugees in Nigeria with emergency aid. On a visit to Mamfé, a Caritas representative reported that 45 thousand people in the diocese are displaced, leaving behind ghost villages: "The security situation is incredibly precarious and many have fled their homes to hide in the bush", he said.
Caritas is currently the only relief agency in the badly affected English-speaking areas of southwestern and northwestern Cameroon, which supplies food, water, medical supplies and shelter, but is very poor in resources.
"Only Caritas was, with difficulty, able to access these areas persecuted by fear and death", notes the operator.
On the other side of the border, Caritas Nigeria registered 25,624 Cameroonian refugees but, according to the UN, the total could be 40 thousand. Most of them are women and children. Only five refugees out of 100 have adequate shelter, the rest sleep in abandoned or open buildings.
The Bishops of Nigeria, warn that the influx of refugees in the States of Taraba, Benue, Akwa-Ibom and Cross River is worsening the poverty of local communities. "There is no food, shelter or drinking water" says a Nigerian village chief. "People are sick and die without care".
The episcopate exhorts both sides to dialogue: "We, the Bishops of Cameroon, believe that a mediation process must now be imposed to find a way out of the crisis. We are all brothers and sisters".
Cameroon is divided between its former French and British territories. In October, the activists of the English-speaking minorities, representing 20% of the population, declared the republic, challenging the government of President Paul Biya, dominated by France (see Fides 30/9/2017). In recent times, says Fr. Emmanual Bekomson of Caritas Calabar, "the crisis has worsened, especially in the areas of Mamfé, Limbe, Buea and Nsan Aragati". "We are going from bad to worse, in the last days deaths and abductions have increased", reports the abbot Kisito Balla Onana, director of Caritas Cameroon. (PN/AP) (Agenzia Fides, 18/5/2018)

AMERICA/PARAGUAY - May Christians be guardians of the environment, in solidarity with those who fight against the voracity of fire and drought