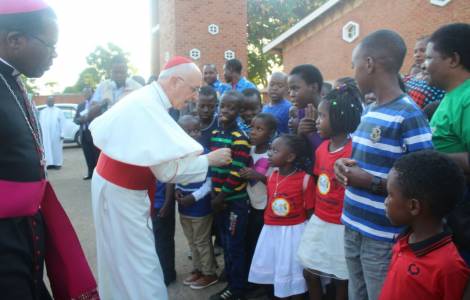 2020-06-08
"We need to clarify the recent gas attacks, before the worse happens", says the Bishop of Chipita

2020-04-18
A Church fund to fight Covid-19; the solidarity of the Bishops of Malawi, Zambia and Zimbabwe

Lusaka (Agenzia Fides) - "Inspired by the appeal of Pope Pius XII in his Encyclical Letter 'Fidei donum', twenty Dioceses in Poland, since 1968, have sent to Zambia about one hundred priests, who have contributed significantly towards the planting and growth of the local Church. The Polish Fidei Donum Priests have been effective witnesses to the merciful love of God, especially in evangelizing the poor, in proclaming the Gospel and in administering the sacraments". Cardinal Fernando Filoni, Prefect of the Congregation for the Evangelization of Peoples, in a message sent to Fr. Christopher Mroz, representative of the Fidei Donum Missionaries in Zambia, recalls the significant contribution given to evangelization in Zambia by the Polish Fidei Donum Priests, on the 50th anniversary of their presence in the African country.
The Prefect of the Missionary Dicastery emphasizes that many of them were, and still are, "actively involved in constructing new missions, teaching in schools, serving in diocesan administration and managing humanitarian programs". Cardinal Filoni urges them "to continue their generous missionary and pastoral work" and joins them in thanking God "for the abundant graces and blessings He has bestowed on Zambia" through their zealous missionary activities. Hoping that this "wonderful exchange of gifts between the Dioceses in Poland and in Zambia will continue", Cardinal Filoni concludes: "May these Jubilee Celebrations be a time of great grace for the Polish Fidei Donum Priests and for their Dioceses of origin, for the Local Churches they are serving and for the entire people of God in Zambia".
Fr. January Liberski, from the Archdiocese of Katowice was the first Polish Fidei Donum Priest in Zambia, who arrived in the African country on March 24, 1968. Since that time 91 Fidei Donum Priests from 20 dioceses have followed in their footsteps, leaving Poland to commit themselves to the missionary apostolate in this land. Twelve of them are still in Zambia, and they are originally from 5 dioceses: Katowice 6, Pelplin 3, Plock, Radom and Torun 1.
Their first commitment was in direct missionary activity, therefore the proclamation of the Gospel, planting the Church, administration of the sacraments, organization of catechetical activity, meeting parishioners in their Small Christian Communities, visiting the sick... Beside direct pastoral work, the Polish Fidei Donum Priests have also been involved in other types of missionary work, such as teaching in schools, lecturers and spiritual directors in the seminary, constructing new mission buildings for both spiritual and humanitarian programs, managing diverse social and drought relief program. One took upon himself research to make a translation of the Bible translation into the local language of Cimambwe and later made an English-Cimambwe dictionary. Some were responsible or members of various diocesan organisms.
Many Polish missionaries dedicated much of their lives to evangelization in Zambia, to the point of dying in the African country. The longest missionary experience was that of Mgr. Marcel Prawica from the Diocese of Radom: he arrived in Zambia in 1972, he spent 41 years in the most isolated rural parish in the Diocese of Kabwe, and returned home only because he was ill, in 2017, a few months before his death.
According to the Statistical Yearbook of the Church, there are 5,239,000 Catholics in Zambia out of a population of 15,474,000 inhabitants. There are 518 diocesan priests and 394 religious priests; 100 religious non-priests and 1,037religious women. In 2016, the Church celebrated the 125th anniversary of evangelization, initiated by the White Fathers and Jesuits. (SL) (Agenzia Fides, 7/5/2018)