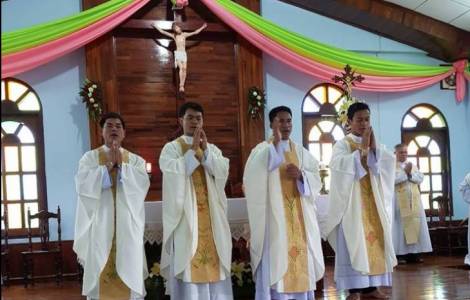 Vientiane (Agenzia Fides) - The Church of Laos rejoices for the ordination of four new priests. As confirmed to Agenzia Fides, on April 29th the small Catholic community in Laos lived a solemn Eucharist celebrated in the Cathedral of St. Louis, in Takhek, in central Laos, with the ordination of four new priests: Fr. Peter Mituna Tanvilay of the Apostolic Vicariate of Khamnouan-Savnnakhet (Central Laos); Fr. Mattia Paly and Fr. Pietro Bounten Heuanded, of the Apostolic Vicariate of Paksé (Southern Laos); Fr. Francesco Saverio Sayasith, of the Apostolic Vicariate of Luang Prabang (Northern Laos). The day after the ordination, on April 30, the new priests celebrated the first Holy Mass in the chapel of Jean-Marie Vianney Seminary, in Takhek.
The celebration, note local sources of Fides, was a moment of joy for the Laotian Church. Mgr. Jean-Marie Inthirath, Apostolic Vicar of Paksé presided over the ordination rite, together with Mgr. Tito Banchong, Apostolic Administrator of Luang Prabang, while almost all the priests of Laos, many religious women, and many lay faithful were present. Sources of Fides confirm that there was no interference or any obstacle posed by the civil authorities, who were even informed of the ordination ceremony.
The new priestly ordinations constitute an important step forward for the local Church which, as Cardinal Louis-Marie Ling Mangkhanekhoun, Apostolic Vicar of Vientiane told Fides, "needs new priests: for this reason the work of formation and deepening of the faith is very important for us today".
The Church in Laos experienced two historical events in recent years: the first was the celebration held in the Vientiane capital on 11 December 2016, when Filipino Cardinal Orlando Quevedo, special envoy of Pope Francis, proclaimed the beatification of 17 new martyrs, including missionaries and Laotian laity, killed between 1954 and 1970 by the Pathet Lao communist guerrillas. The martyrs were recognized by Pope Francis in 2015, in two distinct causes of beatification: the first is that of the Italian missionary Mario Borzaga and catechist Paolo Thoj Xyooj. The second concerns ThaoTien, first Laotian priest, and 14 companions.
A second important step was the creation of the first Laotian Cardinal, Bishop Louis-Marie Ling Mangkhanekhoun, now Apostolic Vicar in Vientiane, who took possession of the Roman church of San Silvestro in Capite on 22 April.
The Catholic Church in Laos is made up of about 60 thousand baptized (1% of the population out of 6 million mainly Buddhists). The last priestly ordinations date back to 2016: Don Paolo Lattana Sunthon, Don Agostino Saegna Be Bunti, Don Michele Kanthak Vilae Luong Di, all belonging to the Apostolic Vicariate of Luang Prabang.
In 2005, thirty years after the last ordination of 1975, priest Sophone Vilavongsy, Laotian and missionary of the Oblates of Mary Immaculate (OMI) was ordained in Vientiane. In December 2006 Pierre Wilaiphorn Phonasa and Luca Sukpaphorn Duangchansai became priests. In 2009 in Savannakhet it was the turn of Fr. Matthieu Somdet Kaluan. In 2011 another new priest was Fr. Pierre Buntha Silaphet.
Today, in addition to the three apostolic Vicars, the Laotian diocesan priests present in the country as a whole, with the four newly ordained, now rise to 24, while 11 are religious priests. (PA) (Agenzia Fides, 2/5/2018)