AFRICA/UGANDA - To bring the hope of Christ in the midst of refugee camps: the mission of the "refugee nuns" 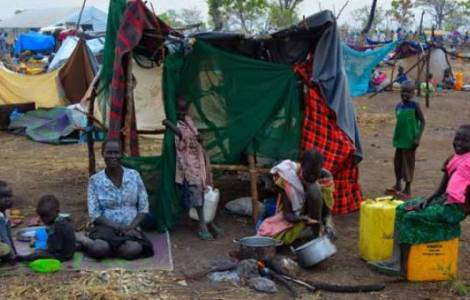 2021-10-14
We Are Youths: young people from Namagabi committed to serving those most in need as a tool of evangelization

2021-09-29
Churches remain closed: "We must also pay attention to the spiritual economy"

Kampala (Agenzia Fides) - In Uganda, South Sudanese refugees do not have anything. The huts where they take refuge are precarious. There is no work. There are not many opportunities for children to continue their studies. The sick are many and do not always have proper care. The land on which they live is transformed into swamps in the rainy season.
Speaking to Agenzia Fides, Sister Lorena Ortiz, a Comboni religious, raised the alarm: there is an emergency in the Ugandan refugee camps. Sister Lorraine and her sisters are doing their utmost to give hope and to provide aid and solidarity, alongside the UNHCR interventions, the UN organization that deals with refugees, and some big NGOs.
The same Comboni nuns are "refugees". "I was living in Kajo Kejii, a center in the Sudanese region of Equatoria, on the border with Uganda together with two sisters. Just over a year ago, tension increased in the area. The rebels began to hunt down the Dinkas, members of President Salva Kiir's ethnic group. In parallel, the militiamen pressured civilians to leave the area. They said they were preparing for a fight with the Juba army and that the area was no longer safe. Women, children and the elderly fled. We too found ourselves alone and we were forced to flee. As soon as we left South Sudan, the rebels looted our community and took everything", says Sister Lorraine to Fides.
The sisters moved to the district of Moyo in Uganda, and live in huge refugee camps where 180,000 women, children, the elderly and the disabled live: in the north of Uganda there are one million South Sudanese who have sought refuge. It is a painful humanity that must organize life in marginal areas. United Nations officials provide the new arrivals with tarpaulins that serve as curtains. "The tarpaulins proved to be very useful in the rainy season - continues the religious - but the heat then dried them out and, when the rains returned, many refugees, especially the weakest, found themselves without protection. We too built a small house and live among them, helping them as much as we can".
The sisters organize moments of prayer and reading of the Holy Scriptures, keep the flame of faith burning and have trust in Christ, in that difficult situation. And they also take care of microcredit projects to help women organize small-scale agricultural and commercial activities. "Many elderly people are ill - observes the nun - we help them to have access to treatment and to build safe shelters. We also give support to students to continue their studies". The nuns are not alone. The UN guarantees food (beans, corn, oil and salt). Then there are some NGOs working in the education sector, psychological support, the sanitation system. "Despite these efforts - observes the religious - life in the camps is precarious. People lack almost everything and, above all, have no prospect for the future".
In response to this mass of refugees, Uganda's response was not univocal. "At first - concludes Sr. Lorena - the Ugandans welcomed the South Sudanese. They allowed them to settle on land that was not intended for cultivation. They helped them in various forms. A small fringe, however, has begun to protest: they dispute the fact that the South Sudanese are given aid and they are not given anything, and that refugees do not pay rent for the occupation of land. Some groups have forced NGOs to hire Ugandans only. But, it must be said, most Ugandans still have a positive attitude". (EC) (Agenzia Fides, 21/3/2018)

AFRICA/MOZAMBIQUE - Evangelization and charity: the first community of the Sisters of Don Orione